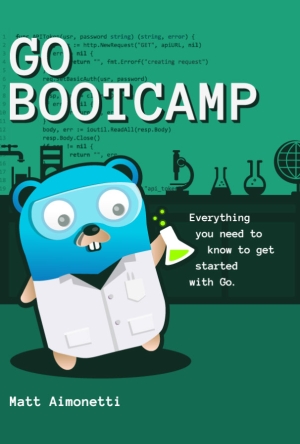 This book is a companion book to the Go Bootcamp event organized for the first time in Santa Monica CA in March 2014.
Download book (pdf - 468.01 KB)
This link for educational purpose only. Please remove file from your computer after familiarization.

This book is a companion book to the Go Bootcamp event organized for the first time in Santa Monica CA in March 2014.

You don’t need to install Go to read this book and follow along. This book was designed to delay the setup process and let you evaluate Go without having to go through the installation process. All examples and solutions are available online in an environment allowing you to execute code right in the browser.

Go, also commonly referred to as 'golang', is a programming language initially developed at Google in 2007 by Robert Griesemer, Rob Pike, and Ken Thompson. It is a statically-typed language with syntax loosely derived from that of C, adding garbage collection, type safety, some dynamic-typing capabilities, additional built-in types such as variable-length arrays and key-value maps, and a large standard library.

The language was announced in November 2009 and is now used in some of Google's production systems. Go's "gc" compiler targets the Linux, Mac OS X, FreeBSD, NetBSD, OpenBSD, Plan 9, and Microsoft Windows operating systems and the i386, amd64, and ARM processor architectures. A second compiler, gccgo, is a GCC frontend.

The Good, the Bad, and the Ugly: An Empirical Study of Implicit Type Conversions in Javascript

An Introduction to Programming in Go

The Business of Android Apps Development: Making and Marketing Apps that Succeed on Google Play, Amazon Appstore and More

Grails Persistence with GORM and GSQL

Concurrency in Go: Tools and Techniques for Developers