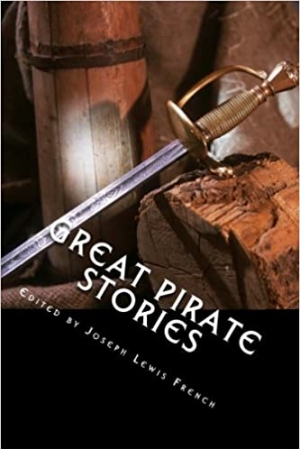 It was a bold hardy world--this of ours--up to the advent of our giant-servant, Steam,--every foot of which was won by fierce conquest of one sort or another. Out of this past the pirate emerges as a romantic, even at times heroic, figure. This final niche, despite his crimes, cannot altogether be denied him. A hero he is and will remain so long as tales of the sea are told.
Download book (pdf - 1.04 MB)
This link for educational purpose only. Please remove file from your computer after familiarization.

“Masterpieces of pirate literature, tales of sea fights, land forays, wreck, pillory and buried treasure, written by great storytellers. This is a book for the reading table, an anthology to read again and again. Each story is complete. French has searched literature for the most thrilling tales. Read of the roaring buccaneers of the Spanish Main, the corsairs of the Deathly Shore, of sinking ships, lost armadas, and death on the ocean.” -The Dial, Volume 73, July, 1922

“The best stories contained in literature about pirates, each one a famous masterpiece, complete and artfully told…A unique anthology, every word of it absorbing, by the compiler of Great Sea Stories.” -The Atlantic, Volume 130, July, 1922

The Capture of Panama, 1671 From The Buccaneers of America. By JOHN ESQUEMELING.

The Malay Proas From Afloat and Ashore. By JAMES FENIMORE COOPER.

The Wonderful Fight of the Exchange of Bristol with the Pirates of Algiers From Purchas, His Pilgrims. By SAMUEL PURCHAS.

The Daughter of the Great Mogul From The King of the Pirates. By DANIEL DEFOE.

Barbarossa--King of the Corsairs From Sea Wolves of the Mediterranean. By E. HAMILTON CURREY, R.N.

Morgan at Puerto Bello From The Buccaneers of America. By JOHN ESQUEMELING.

The Ways of the Buccaneers From Buccaneer Customs on the Spanish Main. By JOHN MASEFIELD after JOHN ESQUEMELING.

A True Account of Three Notorious Pirates From The Buccaneers of America. By HOWARD PYLE, ED.

Narrative of the Capture of the Ship Derby, 1735 By CAPTAIN ANSELM.

Francis Lolonois, the Slave Who Became a Pirate King From The Buccaneers of America. By JOHN ESQUEMELING.

The Fight between the Dorrill and the Moca From The Indian Antiquary, Vol. 49.

Jaddi the Malay Pirate From The Indian Antiquary, Vol. 49.

The Terrible Ladrones From The Ladrone Pirates. By RICHARD GLASSPOOLE.

The Female Captive From an Old Pamphlet, published in 1825. By LUCRETIA PARKER.

The Passing of Mogul Mackenzie, the Last of the North Atlantic Pirates From Blackwood's Magazine. By ARTHUR HUNT CHUTE.

The Last of the Sea-Rovers: The Riff Coast Pirates From the Nautical Magazine. By W. B. LORD.

The Lady With The Dog And Other Stories

The Pirate of Panama

The Man with Two Left Feet & Other Stories - From the Manor Wodehouse Collection, a Selection from the Early Works of P. G. Wodehouse

The Madman and the Pirate

Back to God's Country: And Other Stories
Book Detail
Category Author
Latest Downloads