Hacking the Academy: a book crowdsourced in one week Sented by Jacob 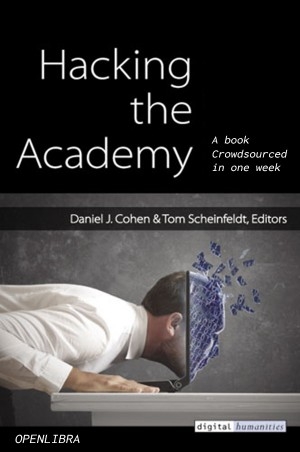 Hacking the Academy: a book crowdsourced in one week

Can an algorithm edit a journal? Can a library exist without books? Can students build and manage their own learning management platforms? Can a conference be held without a program? Can Twitter replace a scholarly society?
Download book (pdf - 964.65 KB)
This link for educational purpose only. Please remove file from your computer after familiarization.

We asked for contributions to a collectively produced volume that would explore how the academy might be beneficially reformed using digital media and technology. The process of creating the edited volume itself would be a commentary on the way things are normally done in scholarly communication, with submissions coming in through multiple channels, including blogs, Twitter, and email, and in multiple formats—everything from a paragraph to a long essay to multimedia. We also encouraged interactivity—the possibility that contributors could speak directly to each other, rather than creating the inert, isolated chapters that normally populate edited volumes. We then sent out notices via our social networks, which quickly and extensively disseminated the call for submissions. Finally, we gave contributors a mere seven days, the better to focus their attention and energy.

Between May 21 and May 28, 2010 we received a remarkable 329 submissions from 177 authors, with nearly a hundred submissions written during the week-long event and the other two-thirds submitted by authors from their prior writing on the subject matter. This struck us as a major success for an untested model, one that we feel could be replicated to provide state-of-thefield volumes in many disciplines, to open debate in ways that journals and books are unable to do, or to aggregate existing works from around the web on a common theme.

From this large pool of contributions we have assembled here what we consider to be the best works of any size and shape (with the unfortunate exception of audio and video, which we could not put into print). Only one-sixth of the contributions made the cut; in general, we sought writing that moved beyond mere complaints about the state of the academy into shrewd diagnoses and potential solutions. There are some rants, to be sure, but also many calm analyses of how academia could work differently.

The Battle For Open: How openness won and why it doesn't feel like victory

Literature, the Humanities, and Humanity

Write Your Own Haiku for Kids: Write Poetry in the Japanese Tradition

Open-Ended Video Games: A Model for Developing Learning for the Interactive Age

Why We Love Star Wars: The Great Moments That Built A Galaxy Far, Far Away

Teachercraft: How Teachers Learn to Use Minecraft in their Classrooms

The Four Pillars Upon Which the Failure of Math Education Rests

The Network Reshapes the Library: Lorcan Dempsey on Libraries, Services and Networks

A Living Systems Theory of Vocational Behavior and Development