Harold Stassen Eisenhower, the Cold War, and the Pursuit of Nuclear Disarmament Sented by Luis 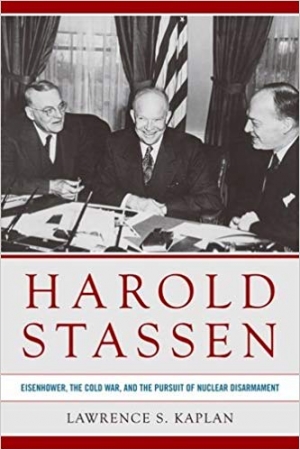 Download book (pdf - 3.34 MB)
This link for educational purpose only. Please remove file from your computer after familiarization.

Harold Stassen (1907–2001) garnered accolades as the thirty-one-year-old "boy wonder" governor of Minnesota and quickly assumed a national role as aide to Admiral William Halsey Jr. during World War II. When Dwight D. Eisenhower was elected in 1952, Stassen was named director of the Mutual Security Administration and then became the president's special assistant for disarmament. In this position, Stassen had the power to profoundly shape the country's foreign policy and became influential in early Cold War policy discussions about the limits and uses of conventional and nuclear weapons.

In this nuanced biography, Lawrence S. Kaplan demonstrates that Stassen's role in Eisenhower's White House deserves more analysis than it has received from scholars. Stassen came to Washington advocating the total elimination of nuclear weapons, but he quickly came to recognize that this would not happen. He refocused his efforts, working for greater international transparency and communication. The liberal internationalism that Stassen espoused became embedded in Cold War policy for decades, and he consistently provided a voice for peace in an increasingly hawkish national security establishment.

Stassen, in many ways, was his own worst enemy; his ambition and ego undermined his efforts and clouded his vision. His feuds with Secretary of State John Foster Dulles were legendary, and while Dulles often prevailed in the meeting room, Stassen's vision of nuclear restraint was one that Eisenhower shared. Kaplan's study provides a new perspective on nuclear disarmament during a critical period in US history and sheds light on Eisenhower's approach to international relations.

The Pyramid Principle: Logic in Writing and Thinking Sented by Daniel

The McKinsey Mind: Understanding and Implementing the Problem-Solving Tools and Management Techniques of the World's Top Strategic Consulting Firm Sented by Sarah Gerdes