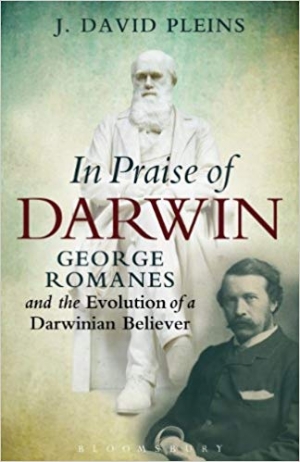 Download book (pdf - 2.81 MB)
This link for educational purpose only. Please remove file from your computer after familiarization.

George John Romanes, close friend and colleague of Darwin, remains a terribly misunderstood figure in the history of evolutionary science. Although his scientific contributions have been valued, his religious journey has been either neglected or misjudged. Typically scholars only acknowledge some of the work on theism he did at the very end of his life and usually blame his wife for doctoring the record with her pieties. His extensive poetry writing, much of it religious, has never been explored and his "Memorial Poem" to Darwin has been completely overlooked. The recent discovery of the original typescript of the poem, lost for more than a century and reprinted in this book for the first time, allows us to enter the mind of a major Darwinian as we watch him struggle to put together faith and science on a positive basis. The typescript of the "Memorial Poem" contains numerous corrections inserted by Romanes as well as several handwritten poems. The recovery of this unique poetic exploration is a major event for Darwin studies and Pleins is the first author to study it and draw out its full significance in the history of the religion/science debate. Pleins recounts Romanes's journey from belief to skepticism and back to faith as he arrives at a new understanding of the religious implications of Darwin's theory of evolution. Throughout, Romanes shows how it is possible for a Darwinian to reframe in creative ways the relation between faith and science. Given that many today invoke Darwin to legitimate an atheistic enterprise, the publication of this poem composed by one of the original Darwinians will spark new discussions regarding these questions.