Internet of Things with the Arduino Yun Sented by Shon 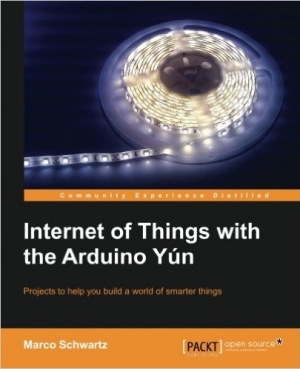 Internet of Things with the Arduino Yun

Projects to help you build a world of smarter things
Download book (pdf - 3.76 MB)
This link for educational purpose only. Please remove file from your computer after familiarization.

Internet of Things (IoT) is currently a growing trend in the technology space, and the Arduino Yun is the perfect board to get started with building IoT projects. This book covers many of the powerful features of the Arduino Yun via four exciting projects. The first project is all about sending weather measurements data to a Google Docs spreadsheet for easy online visualization. The second one is about building an energy consumption meter and controlling devices remotely. The third focuses on the field of security, by helping you to build a camera that is triggered by motion and that uploads pictures automatically to Dropbox. Finally, the last project is in relation with the field of robotics, and focuses on building a robot that is controlled via Wi-Fi.

The main focus of this book is to teach everything you need to know to build complex projects using the Arduino Yun, organized around the fields of home automation, security, and robotics.

Workflow in the 2007 Microsoft Office System

The Book of PF: A No-Nonsense Guide to the OpenBSD Firewall

The Book of PF, 3rd Edition

The Book of GNS3

Foundations of Network Optimization and Games

Advances in Security of Information and Communication Networks

Theory and Applications of OFDM and CDMA

The Internet of Things

Banking in Crisis: The Rise and Fall of British Banking Stability, 1800 to the Present Sented by Daniel