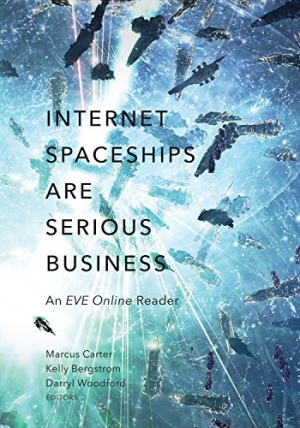 Download book (pdf - 4.56 MB)
This link for educational purpose only. Please remove file from your computer after familiarization.

EVE Online is a socially complex, science-fiction-themed universe simulation and massively multiplayer online game (MMOG) first released in 2003. Notorious for its colossal battles and ruthless player culture, it has hundreds of thousands of players today. In this fascinating book, scholars, players, and EVE's developer (CCP Games) examine the intricate world of EVEOnline-providing authentic accounts of lived experience within a game with more than a decade of history and millions of "real" dollars behind it.

Internet Spaceships Are Serious Business features contributions from outstanding EVE Online players, such as The Mittani, an infamous member of the game's community, as well as academics from around the globe. They cover a wide range of subjects: the game's technicalities and its difficulty; its projection of humanity's future in space; the configuration of its unique, single-server game world; the global nature of warfare in its "nullsec" territory (and how EVE players have formed a global concept of time); stereotypes of Russian players; espionage play; in-game memorials to Vile Rat (aka U.S. State Department official Sean Smith, murdered in the 2012 Benghazi attack); its gendered playing experience; and CCP Games' relationship with players; and its history and legacy.

Internet Spaceships Are Serious Business is a must for EVE Online players interested in a broad perspective on their all-consuming game. It is also accessible to scholars, game designers seeking to understand and replicate the successful aspects unique to EVE Online, and even those who have never played this notoriously complex game.