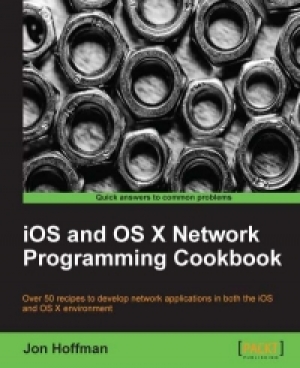 Over 50 recipes to develop network applications in both the iOS and OS X environment
Download book (pdf - 2.99 MB)
This link for educational purpose only. Please remove file from your computer after familiarization.

Darwin, which forms the core set of components for OS X and iOS, is compatible with the Single UNIX Specification Version 3 and POSIX UNIX. Therefore OS X and iOS are UNIX operating systems. While there are numerous books and articles written to teach network development in a UNIX environment there is surprisingly little dedicated to teaching network development specifically in an Apple environment. In this book we will be covering the standard UNIX networking stack with BSD Sockets as well as Apple’s frameworks like CFNetworking and Bonjour.

iOS and OS X Network Programming Cookbook is an enthralling code-focused book on developing client and server applications for the iOS and OS X environments. You will learn how to integrate a number of Unix (BSD Sockets), Apple specific (CFNetworking, NSMutableURLRequest, Bonjour) and third party APIs (AFNetworking, MKNetworking) with your own apps.

The Business of Android Apps Development