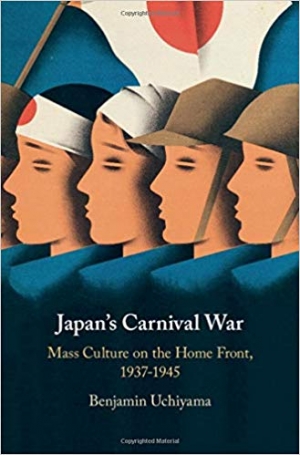 Download book (pdf - 9.70 MB)
This link for educational purpose only. Please remove file from your computer after familiarization.

Japan in the Asia-Pacific War years is usually remembered for economic deprivation, political repression, and cultural barrenness. Benjamin Uchiyama argues that although the war created the opportunity for the state to expand its control over society and mass culture, it also fractured Japanese people's sense of identity, spilling out through a cultural framework which is best understood as 'carnival war'. In this cultural history, we are introduced to five symbolic figures: the thrill-seeking reporter, the defiant munitions worker, the tragic soldier, the elusive movie star, and the glamorous youth aviator. Together they represent both the suppression and proliferation of cultural life in wartime Japan and demonstrate that 'carnival war' coexisted with total war to promote consumerist desire versus sacrifice, fantasy versus nightmare, and beauty versus horror. Ultimately, Uchiyama argues, this duality helped mobilize home front support for the war effort.