Jean of the Lazy A Sented by Emma 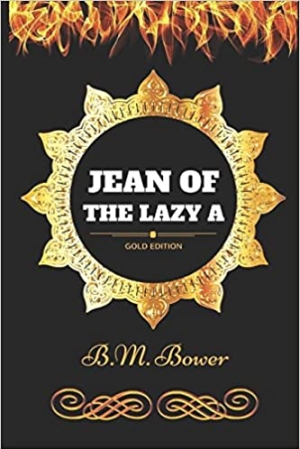 An ordinary story of western ranch life, introducing a murder mystery and a heroine who acts for the "movies." (Cover scan courtesy Bonnie Smith)
Download book (pdf - 925.06 KB)
This link for educational purpose only. Please remove file from your computer after familiarization.

"A man is found shot dead in the kitchen of the Lazy A ranch, and in an absence of other evidence, ranch owner Aleck Douglas is convicted of the crime. His daughter Jean is absolutely certain that he is innocent of the crime, but has no factual evidence with which to prove that her father has been wrongly convicted. With a rapidly dwindling bank account and no clues to speak of, will Jean find a way to free her father and get her old life back. Bertha Muzzy Sinclair or Sinclair-Cowan, née Muzzy best known by her pseudonym B. M. Bower, was an American author who wrote novels, fictional short stories, and screenplays about the American Old West.Her works, featuring cowboys and cows of the Flying U Ranch in Montana, reflected ""an interest in ranch life, the use of working cowboys as main characters (even in romantic plots), the occasional appearance of eastern types for the sake of contrast, a sense of western geography as simultaneously harsh and grand, and a good deal of factual attention to such matters as cattle branding and bronc busting."""

Diane of the Green Van

The Girl at the Halfway House

A Slave is a Slave

A Heart of Stone

A Dog for Christmas

The Outbreak of Peace

With No Strings Attached

Tom Swift And His Sky Racer