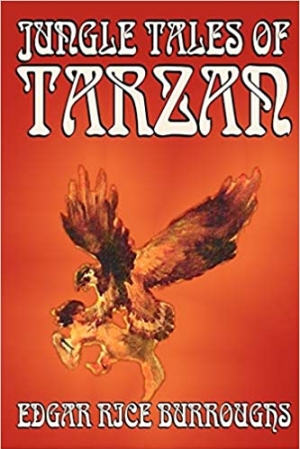 between Tarzan's avenging of his ape foster mother's death and his becoming leader of his ape tribe. In JUNGLE TALES OF TARZAN, Burroughs gives us an Ape-Man who might have fit in a television sitcom or a domestic drama.
Download book (pdf - 949.92 KB)
This link for educational purpose only. Please remove file from your computer after familiarization.

between Tarzan's avenging of his ape foster mother's death and his becoming leader of his ape tribe. In JUNGLE TALES OF TARZAN, Burroughs gives us an Ape-Man who might have fit in a television sitcom or a domestic drama. We see a Tarzan whose character is barely hinted at in the events of Tarzan on the Apes -- this is a collection of stories that take place in the same years as that first novel, but show us a very different aspect of Tarzan. We see "Tarzan's First Love," a tale of a teenage Tarzan with a distracting crush on a big-but-beautiful female gorilla called Teeka. The Ape-Man (well, boy, actually) declares his love for her and battles a childhood friend for her favor. But in the end he comes to understand that some things are Just Not Meant To Be, and forsakes his childhood heart-throb . . . In "The God of Tarzan," the Ape-Man asks himself the meaning of life -- and attempts to track down God in the same way that he would follow the spoor of a wounded deer. In "Tarzan Rescues the Moon," Tarzan sees a lunar eclipse and in his efforts to rescue the moon, shoots arrows into the moon until the moon re-emerges from the eclipse. In the end, it's Tarzan's struggle to find real meanings in the world around him that distinguish him from the apes who are his adoptive kin -- and make him as fascinating today as he was a hundred years ago.

The Science of Fairy Tales

Eastern Tales by Many Story Tellers

Tales of Giants from Brazil

Tales of Wonder: Every Child Should Know

My Book of Favorite Fairy Tales