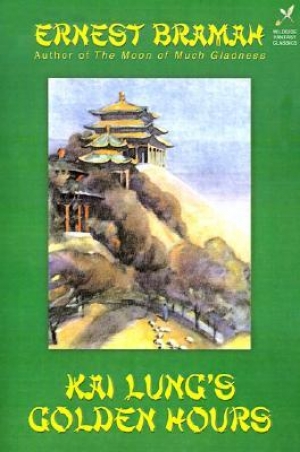 Kai Lung's Golden Hours By Ernest Bramah. Preface: Hilaire Belloc. Man is born to make. His business is to construct; to plan; to carry out the plan: to fit together, and to produce a finished thing. That human art in which it is most difficult to achieve this end and in which it is far easier to neglect it than in any other is the art of writing.
Download book (pdf - 1.09 MB)
This link for educational purpose only. Please remove file from your computer after familiarization.

Kai Lung's Golden Hours By Ernest Bramah. Preface: Hilaire Belloc. Man is born to make. His business is to construct; to plan; to carry out the plan: to fit together, and to produce a finished thing. That human art in which it is most difficult to achieve this end and in which it is far easier to neglect it than in any other is the art of writing. Yet this much is certain, that unconstructed writing is at once worthless and ephemeral; and nearly the whole of our modern English writing is unconstructed, The matter of survival is perhaps not the most important, though it is a test of a kind, and it is a test which every serious writer feels most intimately. The essential is the matter of excellence; that a piece of work should achieve its end. But in either character, the character of survival or the character of intrinsic excellence, construction deliberate and successful is the fundamental condition. It may be objected that the mass of writing must in any age neglect construction. We write to establish a record for a few days; or to send a thousand unimportant messages;or to express for others or for ourselves something very vague and perhaps very weak in the way of emotion, which does not demand construction and at any rate cannot command it. No writer can be judged by the entirety of his writings, for these would include every note he ever sent round the corner every memorandum he ever made upon his shirt cuff, But when a man sets out to write as a serious business, proclaiming by the nature of his publication and presentment that he is doing something he thinks worthy of the time and place in which he lives and of the people to whom he belongs, then if he does not construct he is negligible. Yet,I say,the great mass of men today do not attempt it in the English tongue, and the proof is that you can discover in their slipshod pages nothing of a seal or stamp. You do not, opening a book at random, say at once;This is the voice of such and such an one. It is no one's manner or voice. It is part of a common babel. Therefore in such a time as that of our decline,to come across work which is planned, executed and achieved has something of the effect produced by the finding of a wrought human thing in a wild, It is like finding, as I once found, deep hidden in the tangled rank grass of autumn in Burgundy, on the edge of a wood not far from Dijon, a neglected statue of the eighteenth century. It is like coming round the corner of some wholly desolate upper valley in the mountains and seeing before one a well cultivated close and a strong house in the midst. It is now many years,I forget how many it may be twenty or more, or it may be a little less since The Wallet of Kai Lung was sent me by a friend, The effect produced upon my mind at the first opening of its pages was in the same category as the effect produced by the discovery of that hidden statue in Burgundy, or the coming upon an unexpected house in the turn of a high Pyrenean gorge.