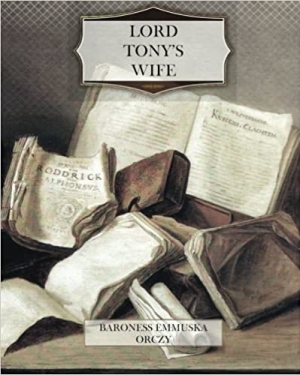 An exciting, rather melodramatic romance of the French revolution. A peasant revolutionist who is trying to lure the heroine and her father back to France, and an unwelcome suitor, engage the cunning of the Scarlet Pimpernel in restoring the kidnapped bride to her husband through hairbreadth escapes and thrilling adventures.
Download book (pdf - 872.33 KB)
This link for educational purpose only. Please remove file from your computer after familiarization.

PBaroness, (Emusca/Emmuska/Emma Magdalena Rosalia Marie Josepha Barbara) Orczy, Mrs Barstow (1865-1947) was a British novelist, playwright and artist of Hungarian origin. She was most notable for her series of novels featuring the Scarlet Pimpernel. Some of her paintings were exhibited at the Royal Academy in London. Her parents left Hungary in 1868, fearful of the threat of a peasant revolution. They lived in Budapest, Brussels, and Paris, where Emma studied music without success. Finally, in 1880, the family moved to London where they lodged with their countryman Francis Pichler. In 1903, she and her husband, Montague MaClean Barstow, wrote a play based on one of her short stories about an English aristocrat, Sir Percy Blakeney, Bart., who rescued French aristocrats from the French revolution#58; The Scarlet Pimpernel. She went on to write over a dozen sequels featuring Sir Percy Blakeney, his family, and the other members of the League of the Scarlet Pimpernel, of which the first, I Will Repay (1906), was the most popular. The last Pimpernel book, Mam'zelle Guillotine, was published in 1940. She also wrote popular mystery fiction and many adventure romances

Getting to Know Vue.js: Learn to Build Single Page Applications in Vue from Scratch Sented by Cameron