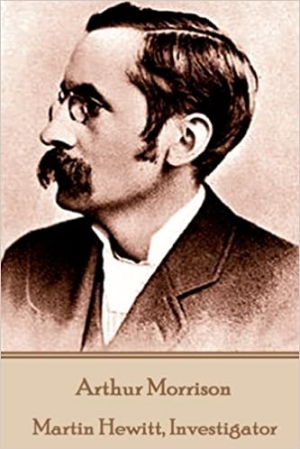 Arthur Morrison was born on November 1st, 1863, in Poplar, in the East End of London. From the age of 8, after the death of his father, he was brought up, along with two siblings, by his mother, Jane. Morrison spent his youth in the East End.
Download book (epub - 331.42 KB)
This link for educational purpose only. Please remove file from your computer after familiarization.

Arthur Morrison was born on November 1st, 1863, in Poplar, in the East End of London. From the age of 8, after the death of his father, he was brought up, along with two siblings, by his mother, Jane. Morrison spent his youth in the East End. In 1879 he began as an office boy in the Architect's Department of the London School Board and, in his spare time, visited used bookstores in Whitechapel Road. He first published, a humorous poem, in the magazine Cycling in 1880. In 1885 Morrison began writing for The Globe newspaper. In 1886, he switched to the People's Palace, in Mile End and, in 1888, published the Cockney Corner collection, about life in Soho, Whitechapel, Bow Street and other areas of London. By 1889 he was an editor at the Palace Journal, reprinting some earlier sketches, and writing commentaries on books and articles on the life of the London poor. By 1890 he was back at The Globe and published ‘The Shadows Around Us’, a supernatural collection of stories. Also at this time he began to develop a keen interest in Japanese Art. In October 1891 his short story A Street appeared in Macmillan's Magazine. The following year he married Elizabeth Thatcher and then befriended publisher and poet William Ernest Henley for whom he wrote stories of working-class life in Henley's National Observer between 1892-94. In 1894 came his first detective story featuring Martin Hewitt, described as "a low-key, realistic, lower-class answer to Sherlock Holmes”. Morrison published A Child of the Jago in 1896 swiftly followed by The Adventures of Martin Hewitt. In 1897 Morrison wrote seven stories about Horace Dorrington, a deeply corrupt private detective, described as "a cheerfully unrepentant sociopath who is willing to stoop to theft, blackmail, fraud or cold-blooded murder to make a dishonest penny." To London Town, the final part of a trilogy including Tales of Mean Streets and A Child of the Jago was published in 1899. Following on came a wide spectrum of works, including novels, short stories and one act plays. In 1911 he published his authoritative work Japanese Painters, illustrated with art from his own collection. Although he retired from journalistic work in 1913 he continued to write about Art. In his last decades Morrison served as a special constable, and reported on the first Zeppelin raid on London. Tragically in 1921 his son, Guy, who had survived the war, died of malaria. The Royal Society of Literature elected him as a member in 1924 and to its Council in 1935. In 1930 he moved to Chalfont St Peter, Buckinghamshire. Here he wrote the short story collection Fiddle o' Dreams and More.

The Last Letter from Your Lover Sented by Jacob