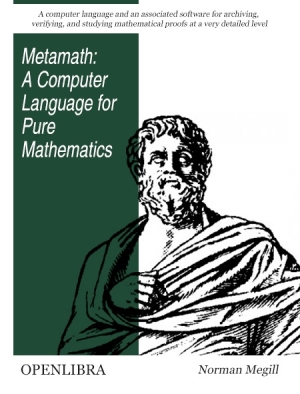 Metamath is a computer language and an associated computer program for archiving, verifying, and studying mathematical proofs at a very detailed level. The Metamath language incorporates no mathematics per se but treats all mathematical statements as mere sequences of symbols.
Download book (pdf - 1.39 MB)
This link for educational purpose only. Please remove file from your computer after familiarization.

Metamath is a computer language and an associated computer program for archiving, verifying, and studying mathematical proofs at a very detailed level. The Metamath language incorporates no mathematics per se but treats all mathematical statements as mere sequences of symbols. You provide Metamath with certain special sequences (axioms) that tell it what rules of inference are allowed. Metamath is not limited to any specific field of mathematics. The Metamath language is simple and robust, with an almost total absence of hard-wired syntax, and I believe that it provides about the simplest possible framework that allows essentially all of mathematics to be expressed with absolute rigor.

Using the Metamath language, you can build formal or mathematical systems that involve inferences from axioms. Although a database is provided that includes a recommended set of axioms for standard mathematics, if you wish you can supply your own symbols, syntax, axioms, rules, and definitions.

Like most computer languages, the Metamath language uses the standard (ascii) characters on a computer keyboard, so it cannot directly represent many of the special symbols that mathematicians use. A useful feature of the Metamath program is its ability to convert its notation into the LATEX typesetting language. This feature lets you convert the ascii tokens you've defined into standard mathematical symbols, so you end up with symbols and formulas you are familiar with instead of somewhat cryptic ascii representations of them. Metamath is probably conceptually diferent from anything you've seen before and some aspects may take some getting used to. This book will help you decide whether Metamath suits your specific needs.

Interactive Data Visualization for the Web: An Introduction to Designing with D3

Simplifying JavaScript: Writing Modern JavaScript with ES5, ES6, and Beyond

The Design of Approximation Algorithms

Java: High-Performance Apps with Java 9: Boost your application's performance with the new features of Java 9