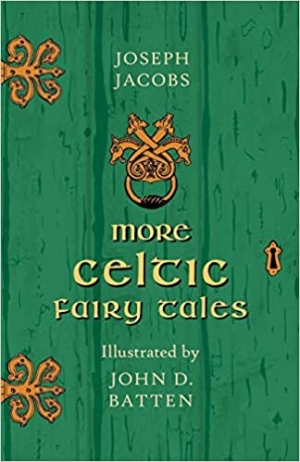 One need not be a specialist in order to discover the scholarship which M. Jacobs has lavished on these volumes of his, in their short prefaces, and in then abundant notes and references.
Download book (pdf - 853.90 KB)
This link for educational purpose only. Please remove file from your computer after familiarization.

More Celtic Fairy Tales is part of a series written by the Australian born folklorist Joseph Jacobs. In this book feature over two dozen stories taken from popular oral tradition and united with John D. Batten's black and white drawings, full of movement and energy. Stories include: 'The Fate of the Children of Lir', 'Jack the Cunning Thief', 'Morraha', 'The Farmer of Liddesdale', 'The Legend of Knockgrafton', 'How Cormac Mac Art went to Faery' and many others.

Heavily influenced by the Brothers Grimm and the romantic nationalism ubiquitous in his contemporary folklorists, Jacobs was responsible for introducing English fairy tales to English children, who had previously chiefly enjoyed those derived from French and German folklore.

Beautifully illustrated by John D. Batten, these timeless fairy tales make for ideal bedtime reading and are not to be missed by collectors. John Dickson Batten (1860-1932) was a British painter, illustrator and print maker who was a leading light in the Art Nouveau movement. He illustrated a number of of fairy tale books written by Joseph Jacobs including, English Fairy Tales (1890), Indian Fairy Tales (1912), and European Folk and Fairy Tales (1916). Presented alongside the text of Celtic Fairy Tales, his illustrations further refine and elucidate Joseph Jacob’s enchanting narratives.

Pook Press celebrates the great ‘Golden Age of Illustration‘ in children’s classics and fairy tales – a period of unparalleled excellence in book illustration. We publish rare and vintage Golden Age illustrated books, in high-quality colour editions, so that the masterful artwork and story-telling can continue to delight both young and old.

Tales of Folk and Fairies

My Book of Favorite Fairy Tales

Eastern Tales by Many Story Tellers

Vrenna and the Red Stone and Other Tales

Tales of the Wonder Club