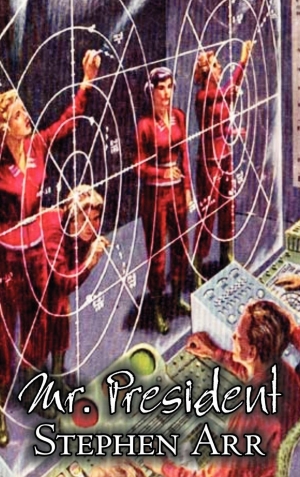 George Wong stood pale and silent by the video screen, listening to the election returns, a long-stemmed glass of champagne clutched forgotten in his trembling right hand.
Download book (epub - 604.64 KB)
This link for educational purpose only. Please remove file from your computer after familiarization.

George Wong stood pale and silent by the video screen, listening to the election returns, a long-stemmed glass of champagne clutched forgotten in his trembling right hand.

The announcer droned on: "—latest returns from Venus, with half of the election districts reporting, give three billion four hundred and ninety-six million votes for Wong, against one billion, four hundred million for Thompson, one billion one hundred million for Miccio, and nine hundred million for Kau. These results, added to the almost complete returns from Earth and the first fragmentary reports from Mars, clearly indicate a landslide vote for Wong as the next President of the Solar Union. The two billion votes from Ganymede and Callisto, which will be received early tomorrow morning, cannot appreciably affect the results. The battle for the twenty-five Vice-Presidents is less clear. It is certain that Thompson, Miccio, Kau, Singh, and DuLavier will all be among those elected, but in what order is not yet...."

Wong leaned over and snapped the video off. His shoulders sagged. He leaned against the console as though too tired to move, a slight, narrow-shouldered man with a very high forehead and thin receding black hair. His large, sad, almond-shaped eyes and yellow-tinted skin indicated that there was a good deal of Asiatic in the mixed blood that flowed through his veins.

"I'm sorry, truly sorry," Michael Thompson said sympathetically, placing a friendly arm across the narrow shoulders of the successful candidate. They were alone in the living room of the hotel suite in New Geneva, which they had shared for the campaign. "The people chose well. After the wonderful job you did in organizing the colonization of Io and Europa, you were the logical man. And then you do have the fantastic Responsibility Quotient of 9.6 out of 10. Anyway," he added with a weary shrug, "don't feel too bad—it looks as though I'll be First Vice-President."

A brief ghost of a smile crossed George Wong's face. "We who are about to die salute you," he said, lifting his glass in a bitter toast to the blank video screen.

Thompson, the man who was to be First Vice-President, silently joined him.

"At least," Wong sighed, putting his empty glass down on the video, "I don't have a family. Look at poor Kau. At Miccio. With wives and children, how they must have suffered when they learned they had been drafted by the conventions.... Well, I guess there's nothing else to do but to go to bed and wait until they come for me in the morning. Good night, Michael."

"Good night, George," Michael Thompson said. He turned toward his own room. "I am sorry," he said again.