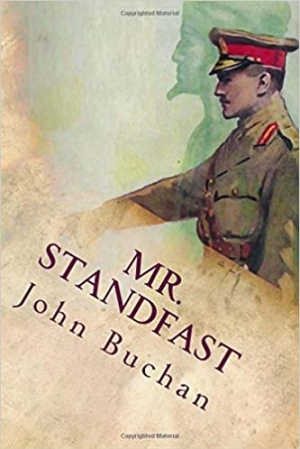 Mr. Standfast by John Buchan. Set in the later years of World War I, Brigadier-General Hannay is recalled from active service on the Western Front to undertake a secret mission hunting for a dangerous German agent at large in Britain.
Download book (pdf - 1.33 MB)
This link for educational purpose only. Please remove file from your computer after familiarization.

Mr. Standfast by John Buchan. Set in the later years of World War I, Brigadier-General Hannay is recalled from active service on the Western Front to undertake a secret mission hunting for a dangerous German agent at large in Britain. Hannay is required to work undercover disguised as a pacifist, roaming the country incognito to investigate a German spy and his agents, and then heads to the Swiss Alps to save Europe from being overwhelmed by the German army. In this nail-biting adventure story, Hannay must outwit a foe far more intelligent than himself; muster the courage to propose to the lovely, clever Mary Lamington; and survive a brutal war. Although Mr. Standfast is a sequel to The Thirty-Nine Steps, it offers far more characterisation and philosophy than the earlier book. For its pace and suspense, its changes of scenery and thrilling descriptions of the last great battles against the Germans, Mr Standfast offers everything that has made its author so enduringly popular. John Buchan (1st Baron Tweedsmuir) was a Scottish novelist and public servant who combined a successful career as an author of thrillers, historical novels, histories and biographies with a parallel career in public life. At the time of his death he was Governor-General of Canada. Buchan was educated at Glasgow and Oxford Universities. After a brief career in law he went to South Africa in 1902 where he contributed to the reconstruction of the country following the Boer War. His love for South Africa is a recurring theme in his fiction. On returning to Britain, Buchan built a successful career in publishing with Nelsons and Reuters. During the first world war, he was Director of Information in the British government. He wrote a twenty-four volume history of the war, which was later abridged.

Mr. Britling Sees It Through