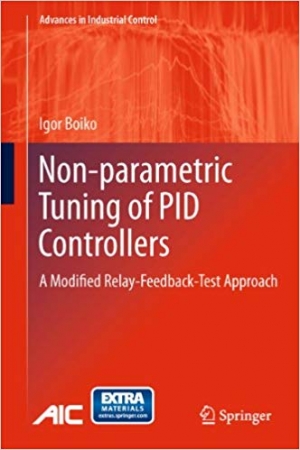 Download book (pdf - 1.70 MB)
This link for educational purpose only. Please remove file from your computer after familiarization.

The relay feedback test (RFT) has become a popular and efficient in process identification and automatic controller tuning. Non-parametric Tuning of PID Controllers couples new modifications of classical RFT with application-specific optimal tuning rules to form a non-parametric method of test-and-tuning. Test and tuning are coordinated through a set of common parameters so that a PID controller can obtain the desired gain or phase margins in a system exactly, even with unknown process dynamics. The concept of process-specific optimal tuning rules in the nonparametric setup, with corresponding tuning rules for flow, level pressure, and temperature control loops is presented in the text.
Common problems of tuning accuracy based on parametric and non-parametric approaches are addressed. In addition, the text treats the parametric approach to tuning based on the modified RFT approach and the exact model of oscillations in the system under test using the locus of a perturbedrelay system (LPRS) method. Industrial loop tuning for distributed control systems using modified RFT is also described. Many of the problems of tuning rules optimization and identification with modified RFT are accompanied by MATLABcode, downloadable from http://extras.springer.com/978-1-4471-4464-9 to allow the reader to duplicate the results.
Non-parametric Tuning of PID Controllers is written for readers with previous knowledge of linear control and will be of interest to academic control researchers and graduate students and to practitioners working in a variety of chemical- mechanical- and process-engineering-related industries.

Choice Architecture: A new approach to behavior, design, and wellness