Off on a Comet Sented by Steve Bark 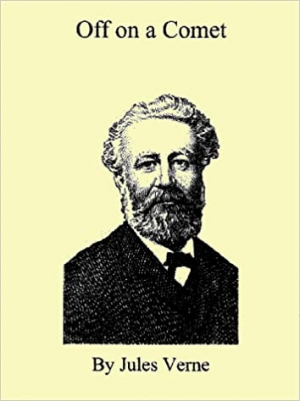 Jules Verne (1828-1905) is best known for his science fiction stories, at the time called "tales of imagination", even though he also wrote several historical novels.
Download book (epub - 618.81 KB)
This link for educational purpose only. Please remove file from your computer after familiarization.

Jules Verne (1828-1905) is best known for his science fiction stories, at the time called "tales of imagination", even though he also wrote several historical novels.

As one of the first science fiction writers, his novels show the basics of good science fiction - good plot, good characterization, sound science, and good projections of scientific trends.

His ability to project the future of science was remarkable. Among his projections were the modern submarine, television, guided missles, satellites, and the airplane. His accuracy was not only in the invention but in the uses to which they were put.

The Aeroplane Boys on the Wing

Five Go Off to Camp

The Man on the Box

Eat Only When You're Hungry

On the Trail of the Space Pirates

On A Torn Away World

On Handling the Data

Christology of the Old Testament: And a Commentary on the Messianic Predictions, Vol. 1
Book Detail
Category Author
Latest Downloads