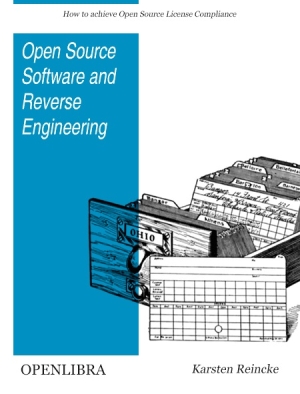 Reverse Engineering is a challenging issue: Sometimes, developers must protect their business relevant work.
Download book (pdf - 424.52 KB)
This link for educational purpose only. Please remove file from your computer after familiarization.

Reverse Engineering is a challenging issue: Sometimes, developers must protect their business relevant work. Thus, they only incorporate open source components published under a permissive or a weak copyleft license: Of course, they want to use the open source software compliantly. But nevertheless, they want be able to distribute their own work as closed software for not exposing their secrets. So, being obliged by the embedded components to permit reverse engineering of the work using the components, would subvert this strategie. Unfortunately, it is often said, that one of the most important weak copyleft licenses, the LGPL, requires to permit reverse engineering.

During the last two years, I was repeatedly asked to explain and defend my viewpoint in respect of reverse engineering and open source software: I am profoundly convinced that there is no problem at all as long as we distribute dynamically linkable programs. This position had often astonished my collocutors. Some of them were still looking for an exit of the dilemma, while the others already had given up and could rather believe that there was such a simple solution. So, — at the end of our discussions – they encouraged me to prove my position in detail.

Learning to Die in the Anthropocene: Reflections on the End of a Civilization (City Lights Open Media)