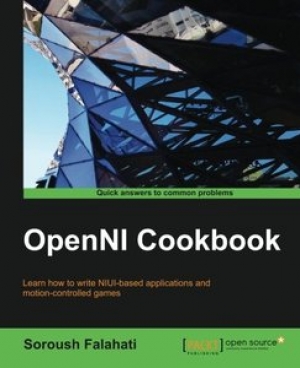 Learn how to write NIUI-based applications and motion-controlled games
Download book (pdf - 19.07 MB)
This link for educational purpose only. Please remove file from your computer after familiarization.

The release of Microsoft Kinect, then PrimeSense Sensor, and Asus Xtion opened new doors for developers to interact with users, re-design their application’s UI, and make them environment (context) aware. For this purpose, developers need a good framework which provides a complete application programming interface (API), and OpenNI is the first choice in this field. This book introduces the new version of OpenNI.

“OpenNI Cookbook” will show you how to start developing a Natural Interaction UI for your applications or games with high level APIs and at the same time access RAW data from different sensors of different hardware supported by OpenNI using low level APIs. It also deals with expanding OpenNI by writing new modules and expanding applications using different OpenNI compatible middleware, including NITE.

“OpenNI Cookbook” favors practical examples over plain theory, giving you a more hands-on experience to help you learn. OpenNI Cookbook starts with information about installing devices and retrieving RAW data from them, and then shows how to use this data in applications. You will learn how to access a device or how to read data from it and show them using OpenGL, or use middleware (especially NITE) to track and recognize users, hands, and guess the skeleton of a person in front of a device, all through examples.You also learn about more advanced aspects such as how to write a simple module or middleware for OpenNI itself.

“OpenNI Cookbook” shows you how to start and experiment with both NIUI designs and OpenNI itself using examples.

Vulkan Cookbook: Work through recipes to unlock the full potential of the next generation graphics API - Vulkan: Solutions to next gen 3D graphics API