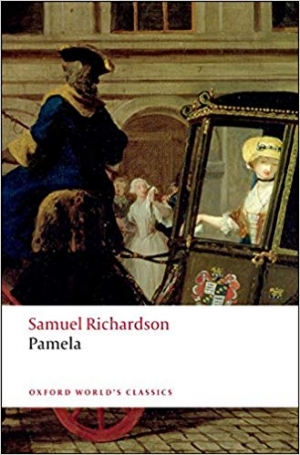 "I cannot be patient, I cannot be passive, when my virtue is in danger."
Download book (pdf - 1.99 MB)
This link for educational purpose only. Please remove file from your computer after familiarization.

Fifteen-year-old Pamela Andrews, alone and unprotected, is relentlessly pursued by her dead mistress’s son. Although she is attracted to young Mr B., she holds out against his demands and threats of abduction and rape, determined to defend her virginity and abide by her own moral standards. Psychologically acute in its investigations of sex, freedom and power, Richardson’s first novel caused a sensation when it was first published, with its depiction of a servant heroine who dares to assert herself. Richly comic and full of lively scenes and descriptions, Pamela contains a diverse cast of characters, ranging from the vulgar and malevolent Mrs Jewkes to the aggressive but awkward country squire who serves this unusual love story as both its villain and its hero.

This edition incorporates all the revisions made by Richardson in his lifetime. Margaret A. Doody’s introduction discusses the genre of epistolary novels, and examines characterization, the role of women and class differences in Pamela.

Olga Romanoff: or, the Syren of the Skies