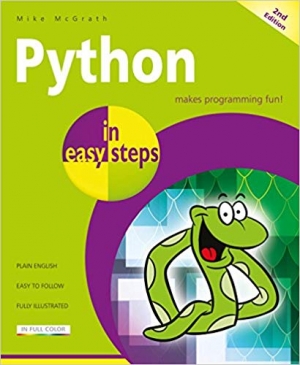 Covers Python 3.7
Download book (epub - 5.41 MB)
This link for educational purpose only. Please remove file from your computer after familiarization.

Python in easy steps, 2nd edition instructs you how to program in the powerful Python language, giving complete examples that illustrate each aspect with colourized source code.

Python in easy steps, 2nd edition begins by explaining how to install the free Python interpreter so you can quickly begin to create your own executable programs by copying the book’s examples. It demonstrates all the Python language basics before moving on to provide examples of Object Oriented Programming (OOP) and CGI scripting to handle web form data. The book concludes by demonstrating how you can use your acquired knowledge to create and deploy graphical windowed applications.

The Python 3.x language is under active development so frequent new releases are made available as small improvements are added to the language and Python in easy steps, 2nd edition features the very latest versions of Python at the time of publication. Python development is one of evolution, rather than revolution, so the examples provided in the book can be used in subsequent releases – simply download the latest version of Python then follow the easy steps.

This second edition is updated to cover Python 3.7.

Design Patterns in PHP and Laravel

Persistence in PHP with Doctrine ORM

A Primer on Scientific Programming with Python, 4th edition

Elixir in Action Sented by Emma