Rhetoric and Demagoguery Sented by Michael 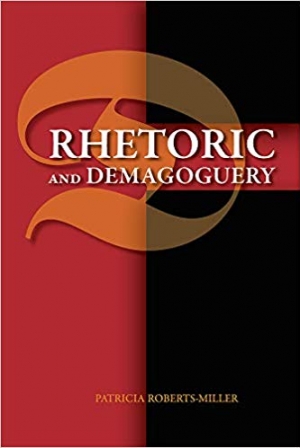 Download book (epub - 620.54 KB)
This link for educational purpose only. Please remove file from your computer after familiarization.

In a culture of profit-driven media, demagoguery is a savvy short-term rhetorical strategy. Once it becomes the norm, individuals are more likely to employ it and, in that way, increase its power by making it seem the only way of disagreeing with or about others. When that happens, arguments about policy are replaced by arguments about identity—and criticism is met with accusations that the critic has the wrong identity (weak, treacherous, membership in an out-group) or the wrong feelings (uncaring, heartless).

Patricia Roberts-Miller proposes a definition of demagoguery based on her study of groups and cultures that have talked themselves into disastrously bad decisions. She argues for seeing demagoguery as a way for people to participate in public discourse, and not necessarily as populist or heavily emotional. Demagoguery, she contends, depoliticizes political argument by making all issues into questions of identity. She broaches complicated questions about its effectiveness at persuasion, proposes a new set of criteria, and shows how demagoguery plays out in regard to individuals not conventionally seen as demagogues.

Roberts-Miller looks at the discursive similarities among the Holocaust in early twentieth-century Germany, the justification of slavery in the antebellum South, the internment of Japanese Americans in the United States during World War II, and the U.S.-led invasion of Iraq in 2003, among others. She examines demagoguery among powerful politicians and jurists (Earl Warren, chief justice of the U.S. Supreme Court) as well as more conventional populists (Theodore Bilbo, two-time governor of Mississippi; E. S. Cox, cofounder of the Anglo-Saxon Clubs of America). She also looks at notorious demagogues (Athenian rhetor Cleon, Ann Coulter) and lesser-known public figures (William Hak-Shing Tam, Gene Simmons).

The Principles of Gothic Ecclesiastical Architecture; Elucidated by Question and Answer- 4th ed.

On the Old Road, Vol. 2 (of 2) A Collection of Miscellaneous Essays and Articles on Art and Literature

A Player and a Gentleman

Becoming Bilingual in School and Home in Tibetan Areas of China: Stories of Struggle