Safe to be Open Sented by Daniel 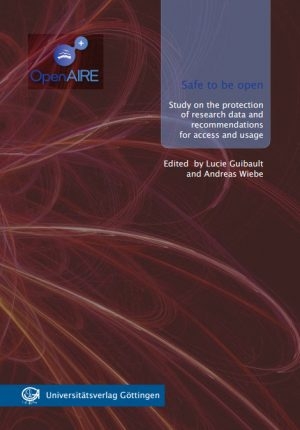 This study is basically divided into four parts. Its objective is to examine the legal requirements for different kinds of usage of research data in an open access infrastructure, such as OpenAIREplus, which links them to publications.
Download book (pdf - 1.73 MB)
This link for educational purpose only. Please remove file from your computer after familiarization.

This study is basically divided into four parts. Its objective is to examine the legal requirements for different kinds of usage of research data in an open access infrastructure, such as OpenAIREplus, which links them to publications.

Within the first part, the requirements for legal protection of research data are analysed. In the process, the existing legal framework regarding potentially relevant intellectual property (IP) rights is analysed from different perspectives: first from the general European perspective and subsequently from that of selected EU Member States (France, Germany, Italy, the Netherlands, Poland and the UK).

Despite European harmonisation, the perhaps surprising outcome of the analysis is that there are some areas of dis-harmonisation between the different Member States. One very significant example of dis-harmonisation is the “exception for scientific research” to the sui generis database right. It is not mandatory for this exception to be introduced into national legislation and it seems that every Member State has its own interpretation of the underlying directive. As it is drafted at the moment, the exception is to all intents and purposes useless.

Another area that causes difficulties is the question of who becomes the rightholder of the sui generis right in a database that is created by a public body or in the course of publicly funded research. Indeed it is far from clear. Some might say the research institution or the funding agency or both become the rightholder. But of the legal regimes under consideration in this study, the only jurisdiction with clear regulation on this matter is the Netherlands and it generally denies a public authority the right to exercise the exclusive database right.

Rage Inside the Machine: The Prejudice of Algorithms, and How to Stop the Internet Making Bigots of Us All

Learning to Die in the Anthropocene: Reflections on the End of a Civilization (City Lights Open Media)

How to Write Well: A Guide For Health And Social Care Students