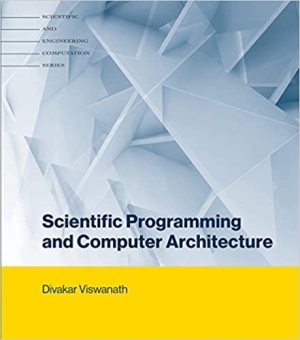 A variety of programming models relevant to scientists explained, with an emphasis on how programming constructs map to parts of the computer.
Download book (pdf - 1.63 MB)
This link for educational purpose only. Please remove file from your computer after familiarization.

A variety of programming models relevant to scientists explained, with an emphasis on how programming constructs map to parts of the computer.

What makes computer programs fast or slow? To answer this question, we have to get behind the abstractions of programming languages and look at how a computer really works. This book examines and explains a variety of scientific programming models (programming models relevant to scientists) with an emphasis on how programming constructs map to different parts of the computer's architecture. Two themes emerge: program speed and program modularity. Throughout this book, the premise is to "get under the hood," and the discussion is tied to specific programs.

The book digs into linkers, compilers, operating systems, and computer architecture to understand how the different parts of the computer interact with programs. It begins with a review of C/C++ and explanations of how libraries, linkers, and Makefiles work. Programming models covered include Pthreads, OpenMP, MPI, TCP/IP, and CUDA.The emphasis on how computers work leads the reader into computer architecture and occasionally into the operating system kernel. The operating system studied is Linux, the preferred platform for scientific computing. Linux is also open source, which allows users to peer into its inner workings. A brief appendix provides a useful table of machines used to time programs. The book's website (https://github.com/divakarvi/bk-spca) has all the programs described in the book as well as a link to the html text.