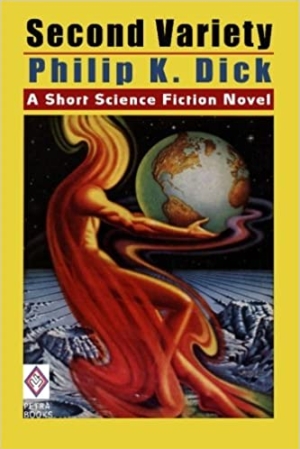 The claws were bad enough in the first place—nasty, crawling little death-robots. But when they began to imitate their creators, it was time for the human race to make peace—if it could!
Download book (pdf - 385.65 KB)
This link for educational purpose only. Please remove file from your computer after familiarization.

"Second Variety" is an influential short story by Philip K. Dick first published in Space Science Fiction magazine, in May 1953. It is one of Dick's many stories in which nuclear war has rendered the Earth's surface to an uninhabitable, gray ash pile, and the only things remaining are killer robots. Philip Kindred Dick was an American novelist, short story writer, and essayist whose published work during his lifetime was almost entirely in the science fiction genre. This early time period from Dick's life was a difficult and impoverished time for him. Dick wrote "Second Variety" in the early years of his career for a popular science fiction magazine. This story is selected here as one of the best of over 120 short science fiction novels that he wrote for the magazines. It is a pleasure to publish this new, high quality, and affordable edition.