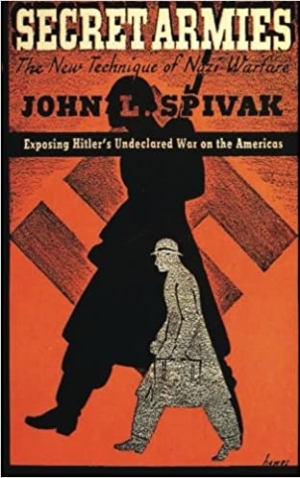 Examines the use of "Fifth Column" techniques in pre-WWII Europe."This sensational inside story of Hitler's far-flung, under-cover poison campaign in the Americas would seem scarcely credible, were it not so thoroughly documented with original letters and records, citing chapter and verse, naming names, dates and places."
Download book (pdf - 766.71 KB)
This link for educational purpose only. Please remove file from your computer after familiarization.

The material in this small volume just barely scratches the surface of a problem which is becoming increasingly grave: the activities of Nazi agents in the United States, Mexico, and Central America. During the years John Spivak observed some of them, watching the original, crudely organized and directed propaganda machine develop, grow and leave an influence for wider than most people seem to realize. What at first appeared to be merely a distasteful attempt by Nazi Government officials at direct interference in the affairs of the American people and their Government, has now assumed the more sinister aspect of also seeking American naval and military secrets. Further studies in Central America, Mexico and the Panama Canal Zone disclosed an espionage network directed by the Rome-Berlin-Tokyo axis and operating against the peace and security of the United States. A scrutiny of the Nazi Fifth Column in a few European countries, especially in Czechoslovakia just before that Republic was turned over to Germany’s mercy by the Munich “peach” and in France where Nazi and Italian agents build an amazing secret underground army, has made the fascist activities in the Western Hemisphere somewhat clearer. Included in one chapter are detailed events which cannot, as far as the author is able to discover, be traced to Nazi espionage; but it shows the influence of Nazi ideology upon England’s now notorious “Cliveden set,” which maneuvered the betrayal of Austria, sacrificed Czechoslovakia and is working in devious ways to strengthen Hitler in Europe. The “Cliveden set” has already had so profound an effect upon the growth and influence of fascism throughout the world, that the author felt it advisable to include it.

The Secret of the Tower

The Secret of the Ninth Planet

The Secret of the Reef

The Secret of the Storm Country

13 Secrets You Should Know About Life Before You Die