She and Allan Sented by Sarah Gerdes 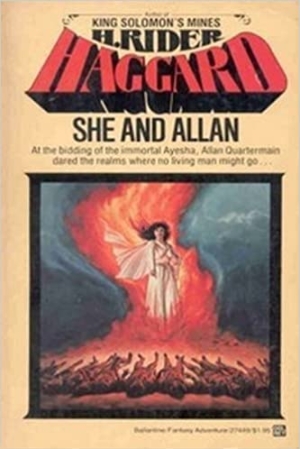 It is seldom that Haggard has attained, in his own special vein, the height and amplitude of the present volume.
Download book (pdf - 1.30 MB)
This link for educational purpose only. Please remove file from your computer after familiarization.

Sir Henry Rider Haggard KBE (1856-1925) was a Victorian writer of adventure novels set in exotic locations. After failing his army entrance exam he was sent to a private 'crammer' in London to prepare for the entrance exam for the British Foreign Office, for which he never sat. Haggard's father sent him to Africa in an unpaid position as assistant to the secretary to Lieutenant-Governor of Natal Sir Henry Bulwer. Heavily influenced by the larger-than-life adventurers he met in Colonial Africa, the great mineral wealth discovered in Africa, and the ruins of ancient lost civilizations in Africa such as Great Zimbabwe, Haggard created his Allan Quatermain adventures. Haggard also wrote about agricultural and social issues reform, in part inspired by his experiences in Africa, but also based on what he saw in Europe. Haggard is most famous as the author of the best-selling novel King Solomon's Mines (1885). Amongst his other works are She (1887), Allan Quatermain (1888), Eric Brighteyes (1891) and Ayesha (1895).

Bears I Have Met - and Others

Thoughts and Sketches in Verse

Tom Swift And His Sky Racer

The Virgin and the Gipsy