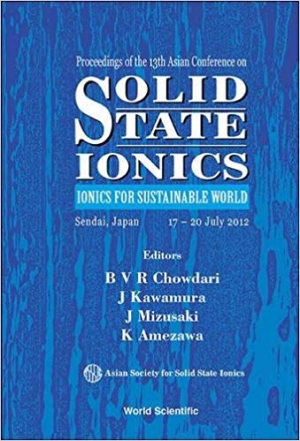 Download book (pdf - 19.52 MB)
This link for educational purpose only. Please remove file from your computer after familiarization.

Solid state ionics is a multidisciplinary scientific and industrial field dealing with ionic transport phenomena in solids. In a couple of decades, solid state ionics has become one of the largest disciplines closely related to energy technologies, such as batteries, fuel cells, and so on.So far, a large number of scientists and engineers in Asia as well as in Europe and US are engaged in the research in solid state ionics. In the context of such a situation, the Asian Society for Solid State Ionics was founded in 1986, and a series of academic conferences has been held biennially since 1988. In 2012, the 13th conference is organized in Sendai, Japan.This book provides research papers describing the latest developments and findings in the field of solid state ionics. The selected contributions from prominent researchers in the Asian Society for Solid State Ionics, which are presented at the 13th Asian Conference on Solid State Ionics, can be found. The papers in this book are detailed and suitable to understand recent research trends in solid state ionics, and thus will be a valuable resource for physicists, chemists, and material scientists.br>

Concepts in Solids: Lectures on the Theory of Solids