That Printer of Udells Sented by Daniel 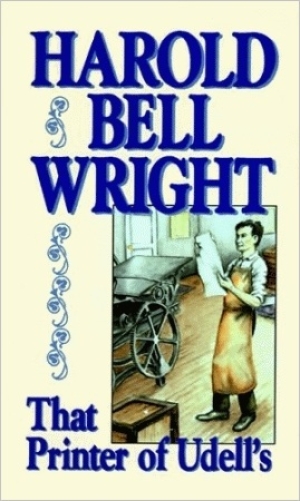 A tale of exalted ideals, human to the very core. When the reader closes this book he will feel as though he has learned more of human nature than ever before.
Download book (pdf - 935.02 KB)
This link for educational purpose only. Please remove file from your computer after familiarization.

Dick Falkner's childhood consisted of poverty and abuse from an alcoholic
father. Recognizing his life for what it was, he ran away from his home, but he
could not run away from all of his problems.
Sixteen years later he found himself hungry of body and empty of spirit in a
small Midwestern town. He was determined to make something of himself and to
not be controlled by alcohol.
Initially, he finds no help in this so-called Christian town. Eventually, he
is taken in by George Udell, a local publisher and a kind-hearted man. George
Udell gives the young man a job, and something more important: spiritual
support. Through hard work and Christian morals, the man who becomes known as
"that printer of Udell's" rises above his past to a new life with
God, inspiring those around him along the way.
As in Wright's The Shepherd of the Hills and The Calling
of Dan Matthews, both also published by Pelican, good deeds and a
strong belief in God form the basis for a happy life, no matter what the past.

Creatures That Once Were Men

The Light That Lies

The People that Time Forgot

The Paradigm: The Ancient Blueprint That Holds the Mystery of Our Times
Book Detail
Category Author
Latest Downloads

Alfresco for Administrators Sented by Shon