The Adventures of Gerard Sented by Rebecca 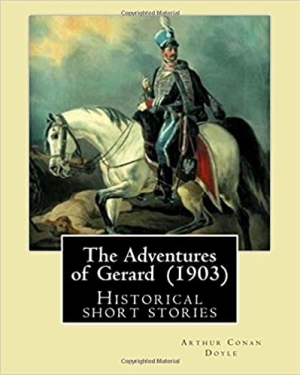 The Adventures of Gerard

I hope that some readers may possibly be interested in these little tales of the Napoleonic soldiers to the extent of following them up to the springs from which they flow. The age was rich in military material, some of it the most human and the most picturesque that I have ever read.
Download book (pdf - 816.61 KB)
This link for educational purpose only. Please remove file from your computer after familiarization.

The Adventures of Gerard is a compilation of short stories that Sir Arthur Conan Doyle wrote regarding a French Brigadier named Etienne Gerard who thinks very highly of himself as can be reflected in how he told his stories. The book is divided into chapters containing different segments of his life as a soldier under the leadership of Napoleon together with his personal exploits and the romance that swept his way in between. Typical of war stories, some depicts bloody encounters with his enemies and how he was able to escape those encounters. However, there were soft moments particularly his encounter with women along the way even if she is from their enemy.Brigadier Gerard is the hero of a series of historical short stories by the British writer Arthur Conan Doyle. The hero, Etienne Gerard, is a Hussar officer in the French Army during the Napoleonic Wars. Gerard's most notable attribute is his vanity – he is utterly convinced that he is the bravest soldier, greatest swordsman, most accomplished horseman and most gallant lover in all France. Gerard is not entirely wrong, since he displays notable bravery on many occasions, but his self-satisfaction undercuts this quite often. Obsessed with honour and glory, he is always ready with a stirring speech or a gallant remark to a lady. Conan Doyle, in making his hero a vain, and often rather uncomprehending, Frenchman, was able to satirise both the stereotypical English view of the French and – by presenting them from Gerard's baffled point of view – English manners and attitudes....Gerard tells the stories from the point of view of an old man now living in retirement in Paris. We discover that he was born in Gascony in the early 1780s (he is 25 in "How the Brigadier Captured Saragossa"). In "How the Brigadier Rode to Minsk" he attends a review of troops about to depart for the Crimea (1854–5), and this is the last identifiable date in his life, although "The Last Adventure of the Brigadier" has a still later setting, with Gerard about to return to his Gascon homeland. He first joins the 2nd Hussars – the Hussars of Chamberan – around 1799, serving as a lieutenant and junior captain. He first sees action at Marengo in Italy in 1800. He transfers to the 3rd Hussars of Conflans in 1807 as a senior captain. He speaks somewhat idiosyncratic English, having learned it from an officer of the Irish Brigade of the French Army. By 1810 he is colonel of the 2nd Hussars. He serves in Spain, Portugal, Italy, Germany and Russia. He is awarded the Grand-Cross of the Légion d'honneur by Napoleon in 1814. There are various discrepancies in the accounts of his life, not the least that in none of the stories except the last is he married. Conan Doyle enthusiasts have noted that Gerard is modelled on the real-life Baron Jean Baptiste Antoine Marcellin de Marbot, a noted French light cavalry officer during the Napoleonic Wars. Conan Doyle wrote with great affection about Marbot's memoirs in Through the Magic Door. The fictional Gerard is not to be confused with the real Napoleonic officer Etienne Maurice Gérard (1777–1852), who rose to become a Marshal and later Prime Minister of France.... Sir Arthur Ignatius Conan Doyle KStJ, DL (22 May 1859 – 7 July 1930) was a British writer and physician, most noted for creating the fictional detective Sherlock Holmes and writing stories about him which are generally considered milestones in the field of crime fiction. He is also known for writing the fictional adventures of a second character he invented, Professor Challenger, and for popularising the mystery of the Mary Celeste. He was a prolific writer whose other works include fantasy and science fiction stories, plays, romances, poetry, nonfiction and historical novels.

Ola and the Sea Wolf

Lasher (Lives of the Mayfair Witches #2)

The Art of Currency Trading: A Professional's Guide to the Foreign Exchange Market (Wiley Trading) Sented by Steve Bark