The Ancient Allan Sented by Rebecca 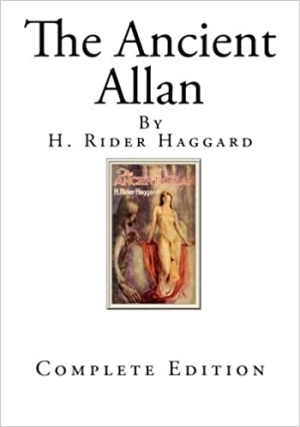 In this new story of ancient Egypt, Sir Rider Haggard brings back for still another adventure--and such an adventure--the immortal Allan Quatermain. To quote Allan himself, "This is the weirdest of all my experiences." While not in any sense a sequel to THE IVORY CHILD, the reader will meet several of the characters of that story in this new book.
Download book (pdf - 1.05 MB)
This link for educational purpose only. Please remove file from your computer after familiarization.

The Ancient Allan - By H. Rider Haggard – Complete Edition. Classic H. Rider Haggard. Now I, Allan Quatermain, come to the weirdest (with one or two exceptions perhaps) of all the experiences which it has amused me to employ my idle hours in recording here in a strange land, for after all England is strange to me. I grow elderly. I have, as I suppose, passed the period of enterprise and adventure and I should be well satisfied with the lot that Fate has given to my unworthy self. To begin with, I am still alive and in health when by all the rules I should have been dead many times over. I suppose I ought to be thankful for that but, before expressing an opinion on the point, I should have to be quite sure whether it is better to be alive or dead. The religious plump for the latter, though I have never observed that the religious are more eager to die than the rest of us poor mortals. For instance, if they are told that their holy hearts are wrong, they spend time and much money in rushing to a place called Nauheim in Germany, to put them right by means of water-drinking, thereby shortening their hours of heavenly bliss and depriving their heirs of a certain amount of cash. The same thing applies to Buxton in my own neighbourhood and gout, especially when it threatens the stomach or the throat. Even archbishops will do these things, to say nothing of such small fry as deans, or stout and prominent lay figures of the Church.

The Haunter of the Dark

Sexual Ideology in the Works of Alan Moore

In the Mahdi's Grasp

The Boy Ranchers on Roaring River

The Vision Of Tom Chuff