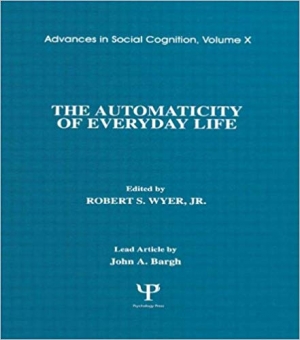 As Skinner argued so pointedly, the more we know about the situational causes of psychological phenomena, the less need we have for postulating internal conscious mediating processes to explain those phenomena.
Download book (pdf - 1.72 MB)
This link for educational purpose only. Please remove file from your computer after familiarization.

This 10th book in the series addresses automaticity and how it relates to social behavior. The lead article, written by John Bargh, argues that social psychology phenomena are essentially automatic in nature, as opposed to being mediated by conscious choice or reflection. Bargh maintains that an automatic mental phenomenon is that which occurs reflexively whenever certain triggering conditions are in place; when those conditions are present, the process runs off autonomously, independently of conscious guidance. In his lead article, he focuses on these preconsciousautomatic processes that can be contrasted with postconscious and goal-dependent forms of automaticity which depend on more than the mere presence of environmental objects or events. Because social psychology, like automaticity theory and research, is also largely concerned with phenomena that occur whenever certain situational features or factors are in place, social psychology phenomena are essentially automatic. Students and researchers in social and cognitive psychology will find this to be a provocative addition to the series.