The Book of the Thousand Nights and a Night, vol 16 Sented by Emma 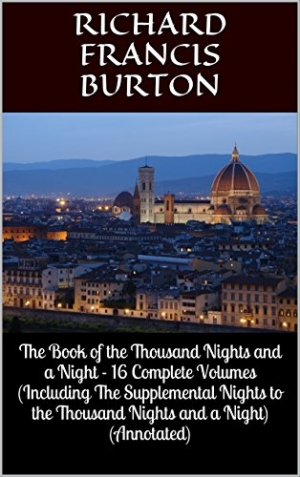 The Book of the Thousand Nights and a Night, vol 16

*This Book is annotated (it contains a detailed biography of the author). *An active Table of Contents has been added by the publisher for a better customer experience. *This book has been checked and corrected for spelling errors.
Download book (pdf - 1.01 MB)
This link for educational purpose only. Please remove file from your computer after familiarization.

The Book of the Thousand Nights and a Night (1885), subtitled A Plain and Literal Translation of the Arabian Nights Entertainments, is a celebrated English language translation of One Thousand and One Nights (the “Arabian Nights”) – a collection of Middle Eastern and South Asian stories and folk tales compiled in Arabic during the Islamic Golden Age (8th−13th centuries) – by the British explorer and Arabist Richard Francis Burton (1821–1890).

Burton's translation was unabridged and unexpurgated English translation done in the 1880s. Owing to the sexual imagery in the source texts (which Burton made a special study of, adding extensive footnotes and appendices on "Oriental" sexual mores) and to the strict Victorian laws on obscene material, the translation was printed as private edition for subscribers only, rather than being published in the usual manner. Burton's original ten volumes were followed by a further six entitled The Supplemental Nights to the Thousand Nights and a Night (1886–88).

The Witch of Prague

Fairy Tales; Their Origin and Meaning

The Adventures of Puss in Boots, Jr.

The Book of the Thousand Nights and a Night, vol 14

The King of the Golden River