The Boy Ranchers in Camp Sented by Rebecca 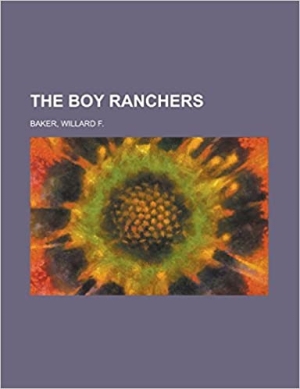 Excerpt: ...a horse. Across the range blew wisps of smoke from the greasewood camp fire, and then came the smell of bacon and coffee, than which there is no aroma more to be desired in the world.
Download book (pdf - 740.31 KB)
This link for educational purpose only. Please remove file from your computer after familiarization.

Excerpt: ...a horse. Across the range blew wisps of smoke from the greasewood camp fire, and then came the smell of bacon and coffee, than which there is no aroma more to be desired in the world. "Um!" murmured Nort, sniffing the air. "Isn't that great?" cried his brother. "It will be, if we can get some," said Nort, chuckling. But he need not have worried, for, a few minutes later, there floated to the ears of the boy ranchers the call of Bud: "Come an' get it!" The cattle, around which they had been slowly riding, needed no attention now, and in a short time the five cowboys-for Nort and Dick could truly be called by this name now-were eating an early breakfast. "One good thing came out of this fracas, anyhow," observed Chot, as he passed his plate for more flapjacks and bacon, and replenished his tin cup with coffee. "What's that?" asked Dick, feeling his neck where the rough rope had broken the skin slightly. "Well, we'll get an early start," answered the cowboy, "and that's a lot when you're hazing steers to the railroad. Every pound counts for the boss, and you can easily run off a thousand dollars by driving 'em along during the heat of the day. We can let 'em rest at noon if we start now." "That's the idea," said Bud. A little later, the remains of the camp fire having been carefully stamped out, to prevent dry grass from catching, packs were slung up behind the saddles-said packs consisting of sleeping canvas, a few utensils and grub-and the start was made. The cattle were gradually headed in the direction it was desired that they should take-the shortest route to the railroad. Nort rode up ahead with Chot, while Dick, Bud and Dirk kept to the rear to haze along the stragglers. There was not much trouble. The cattle had been watered and fed, and were in prime condition. At noon a halt was made to save the animals during the excessive heat, but toward evening they started off once more, and traveled until darkness fell. Camp was made again out...

The Trampling of the Lilies

Co Aytch Maury Grays First Tennessee Regiment: Or, a Side Show of the Big Show

''Over There'' with the Australians

The Craft of Text Editing. A cookbook for an Emacs Sented by Sarah Gerdes

Tex for the Impatient Sented by Jacob