The Corsair King Sented by Rebecca 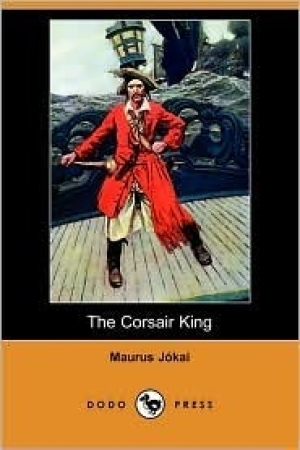 Mor Jokai, born Moric Jokay (1825-1904), outside Hungary also known as Maurus Jokai, was a Hungarian dramatist and novelist. On the re-establishment of the Hungarian constitution by the Composition of 1867, he took an active part in politics. As a constant supporter of the Tisza administration, not only in parliament, where he sat continuously for more than twenty years, but also as the editor of the government organ, Hon, founded by him in 1863, he became a power in the state, and, though he never took office himself, frequently extricated the government from difficult places. He was an archromantic, with an almost Oriental imagination, and humour of the purest, rarest description. He continued to devote most of his time to literature, and his productiveness after 1870 was stupendous, amounting to some hundreds of volumes. Stranger still, none of this work is slipshod, and the best of it deserves to endure. His works include: Dr. Dumany's Wife (1891), The Nameless Castle (1896), The Poor Plutocrats (1899), Halil the Pedlar: A Tale of Old Stambul (1901) and Manasseh: A Romance of Transylvania (1901).

Jack of the Pony Express or, The Young Rider of the Mountain Trails

The Saddle Boys in the Grand Canyon