The Desert of Wheat Sented by Daniel 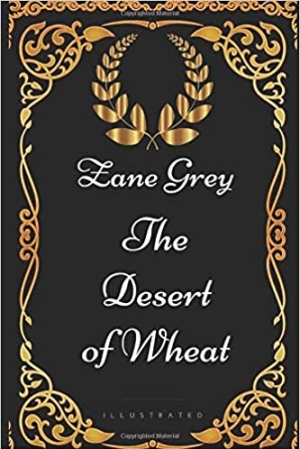 The Desert of Wheat

The story of one man's fight to purge himself of a hated secret, and his war against the I.W.W.'s who ruin his harvest. An "anti-Bolshevist" tale.
Download book (pdf - 1.18 MB)
This link for educational purpose only. Please remove file from your computer after familiarization.

From the master of the western comes a novel full of romance and adventure. The novel begins: Late in June the vast northwestern desert of wheat began to take on a tinge of gold, lending an austere beauty to that endless, rolling, smooth world of treeless hills, where miles of fallow ground and miles of waving grain sloped up to the far-separated homes of the heroic men who had conquered over sage and sand. The son of a German Farmer in Washinton state during WWI, decides to join the Army to fight the Germans and "kill" the German part of his heritage. Along the way, he falls in love with the daughter of a rich farmer, and then has to protect her and himself from a worldwide labor organization that is reaking havoc all over the country to cause problems with the war effort. An interesting, if very melodramatic, take on World War I

The Eye of Osiris

The Lies About Truth

Baroness Emma Orczy - The League of the Scarlet Pimpernel

Murder in the Gunroom

TCP/IP Architecture, Design and Implementation in Linux Sented by Shon