The Desert Valley Sented by Emma 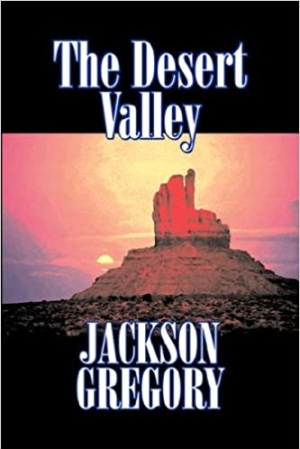 A college professor sets out with his daughter to find gold. They meet a rancher who loses his heart, and becomes involved in a feud. An intensely exciting story.
Download book (pdf - 927.24 KB)
This link for educational purpose only. Please remove file from your computer after familiarization.

The Desert Valley is set in the desert country of Arizona and New Mexico. Professor James Longstreet and his daughter Helen have come west to prospect for gold. They encounter a mysterious campfire, with bacon cooking and coffee boiling, but no camper to be found. Later, they meet Alan Howard of the old Diaz Rancho, who tells them the camper left in a hurry, as though pursued, and mentions an Indian legend of the god Pookhonghoya, who hunts the souls of enemies with a strange wolflike companion.

Jackson Gregory was a California schoolteacher before turning to writing. His work first appeared in Adventure in 1915; in short order he became a regular in Western Story. He did mysteries, fantasy, and south sea adventure, but wrote mainly westerns, producing several per year till his death in 1943.

The Boy Ranchers on the Trail

How the Finch Stole Christmas

When the World Screamed

The Man Who Knew Too Much