The Gods of Mars Sented by Luis 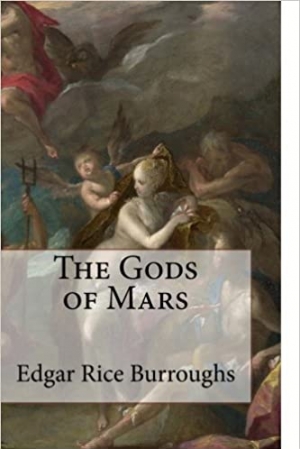 The Gods of Mars is a classic fantasy adventure novel by Edgar Rice Burroughs and a sequel to A Princess of Mars. At the end of the first book, A Princess of Mars, John Carter is unwillingly transported back to Earth.
Download book (epub - 810.60 KB)
This link for educational purpose only. Please remove file from your computer after familiarization.

The Gods of Mars is a classic fantasy adventure novel by Edgar Rice Burroughs and a sequel to A Princess of Mars. At the end of the first book, A Princess of Mars, John Carter is unwillingly transported back to Earth. The Gods of Mars begins with his arrival back on Barsoom (Mars) after a ten-year separation from his wife Dejah Thoris, his unborn child, and the Red Martian people of the nation of Helium, whom he has adopted as his own. Unfortunately, John Carter materializes in the one place on Barsoom from which nobody is allowed to depart: the Valley Dor, which is the Barsoomian afterlife. After John Carter's arrival, a boat of Green Martians on the River Iss are ambushed by the previously unknown Plant Men. The lone survivor is his friend Tars Tarkas, the Jeddak of Thark, who has taken the pilgrimage to the Valley Dor to find John Carter. Having saved their own lives, Carter and Tars Tarkas discover that the Therns, a white-skinned race of self-proclaimed gods, have for eons deceived the Barsoomians elsewhere by disseminating that the pilgrimage to the Valley Dor is a journey to paradise. Most arrivals are killed by the beasts of Valley, and the survivors enslaved or eaten by Therns. John Carter and Tars Tarkas rescue Thuvia, a slave girl, and attempt to escape, capitalizing on the confusion caused by an attack by the Black Pirates of Barsoom upon the Therns. During the attack, Tars Tarkas and Thuvia hijack a Black Pirate flier, while John Carter fights his way aboard another, killing all but one of the Pirates, and rescuing a captive Thern princess. From the captured Pirate Xodar, Carter learns that the Black Pirates, called the "First Born", also think of themselves as gods, and accordingly prey upon the Therns; and additionally identifies the captive Thern as Phaidor, daughter of the "Holy Hekkador" (high priest) of the Therns. When their flier is recaptured by the First Born and taken to their underground realm of Omean, Carter is taken before Issus, the self-proclaimed goddess of Barsoom, who dictates the Therns through secret communications which they mistake for divine revelation. Issus takes Phaidor as a handmaiden for one Martian year; whereas Carter is imprisoned, with Xodar as his slave as punishment for being defeated by John Carter. Thereafter Carter treats him with honor, and thus gains his friendship. In prison, they encounter a young man later identified as Carter's son Carthoris, with whom Carter is taken to a series of games wherein the previous year's handmaidens are killed and later eaten by Issus and her nobles. John Carter leads a revolt of the prisoners, killing many of the First Born; and upon the suppression of their revolt, he and Carthoris escape via underground tunnels, and give themselves to guards unacquainted with the revolt to be returned to their prison. Upon hearing of the revolt, Xodar rejects Issus’ divinity and joins the others in escape. Upon later abandoning their aircraft, they encounter Thuvia, who describes the capture of Tars Tarkas by the green warriors of Warhoon (a clan rival to his own). John Carter goes to rescue Tars Tarkas, but is discovered by his enemies. After a chase, Thuvia is sent on alone, mounted, while the men attempt a stand against the Warhoons. They are rescued by the Heliumetic navy but do not find Thuvia. Commanding one of the warships is Carter’s friend Kantos Kan but the fleet is commanded by Zat Arras, a Jed (chieftain) of the hostile client state of Zodanga, and Carter is suspected of returning from the Valley of Dor, which is punishable by death. Tardos Mors, the Jeddak of Helium, and Mors Kajak, the Jed of Hastor (the grandfather and father, respectively, of Dejah Thoris, and thus Carter’s in-laws) are absent from Helium, having led fleets in search of Carthoris. Later, John Carter discovers that Dejah Thoris may have taken the pilgrimage to the Valley Dor to find him.