The Gun Sented by Musa 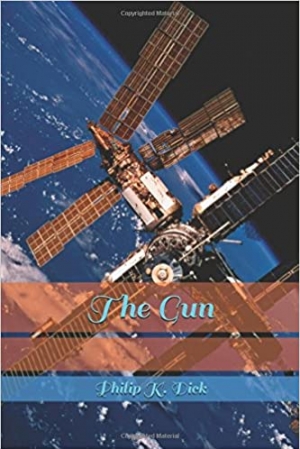 The Gun is a science fiction short story by Philip K. Dick, first published in 1952 September issue of Planet Stories, and later published in Beyond Lies the Wub in 1984. "The Gun" has been published in Italian, German, French and Polish translations. The plot centers around a group of space explorers who investigate a planet which appears deserted.
Download book (epub - 732.17 KB)
This link for educational purpose only. Please remove file from your computer after familiarization.

The Gun is a science fiction short story by Philip K. Dick, first published in 1952 September issue of Planet Stories, and later published in Beyond Lies the Wub in 1984. "The Gun" has been published in Italian, German, French and Polish translations. The plot centers around a group of space explorers who investigate a planet which appears deserted. However, they are shot down and crash land on the planet. While repairing their ship, a team of explorers sets to survey the surrounding area, where they discover the ruins of an ancient city. Upon further investigation, it is revealed that the gun which shot them down is in the city, and is programmed to shoot anything down which enters the airspace above the city. They examine the gun and discover that it is protecting a tomb directly underneath it—a tomb which contains artifacts, film and photographs of a lost civilization. In order to prevent themselves from being shot down by the same gun while attempting to leave the planet, they destroy the gun and take the artifacts with them. As they leave the planet, hoping to return one day, it is revealed that several automatized machines have begun to repair and reload the gun once more. Author Philip Kindred Dick (December 16, 1928 – March 2, 1982) was an American writer known for his influential work in science fiction. His work explored philosophical, social, and political themes, with stories dominated by monopolistic corporations, alternative universes, authoritarian governments, and altered states of consciousness. His writing also reflected his interest in metaphysics and theology, and often drew upon his life experiences in addressing the nature of reality, identity, drug abuse, schizophrenia, and transcendental experiences. Born in Illinois, he eventually moved to California and began publishing science fiction stories in the 1950s. His stories initially found little commercial success. His 1962 alternative history novel The Man in the High Castle earned Dick early acclaim, including a Hugo Award for Best Novel. He followed with science fiction novels such as Do Androids Dream of Electric Sheep? (1968) and Ubik (1969). His 1974 novel Flow My Tears, the Policeman Said won the John W. Campbell Memorial Award for best novel. Following a series of religious experiences in February–March 1974, Dick's work engaged more explicitly with issues of theology, philosophy, and the nature of reality, as in such novels as A Scanner Darkly (1977) and VALIS (1981). A collection of his non-fiction writing on these themes was published posthumously as The Exegesis of Philip K. Dick (2011). He died in 1982, at age 53, due to complications from a stroke.

The Legion of Lazarus

The Street That Wasn't There

Lost On The Moon

Trees are Where You Find Them

Doctor Who: The Empire of Glass

The Scales of Injustice

Getting Started with nopCommerce Sented by Shon