The Hosts of the Air Sented by Luis 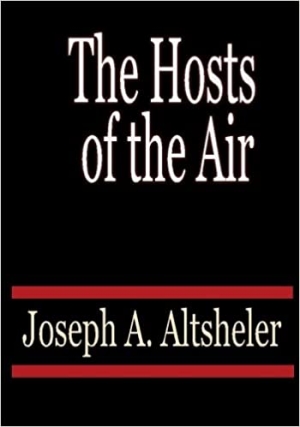 The Hosts of the Air

"The Hosts of the Air" is the third and concluding volume of the World War Series, of which "The Forest of Swords" and "The Guns of Europe" were the predecessors. It deals primarily with the love story of John Scott and Julie Lannes, but all the characters of the earlier books reappear in this romance also.
Download book (pdf - 1.05 MB)
This link for educational purpose only. Please remove file from your computer after familiarization.

A passage from the book... Joseph Altsheler began writing juvenile science fiction, when there were few books in the genre. Because Altsheler felt a responsibility to his young readers, he was careful to make his books historically accurate. His simple language and interesting plots are welcome at any age. The World War Series contains The Guns of Europe, The Hosts of the Air and The Forest of Swords. The Hosts of the Air is the third and concluding book in the series. The story is primarily a love story between John Scott and Julie Lannes. All the characters from the earlier books reappear in this concluding story.. A young man was shaving. His feet rested upon a broad plank embedded in mud, and the tiny glass in which he saw himself hung upon a wall of raw, reeking earth. A sky, somber and leaden, arched above him, and now and then flakes of snow fell in the sodden trench, but John Scott went on placidly with his task. The face that looked back at him had been changed greatly in the last six months. The smoothness of early youth was gone--for the time--and serious lines showed about the mouth and eyes. His cheeks were thinner and there was a slight sinking at the temples, telling of great privations, and of dangers endured. But the features were much stronger. The six months had been in effect six years. The boy of Dresden had become the man of the trenches.

King of the Khyber Rifles

In the King's Name