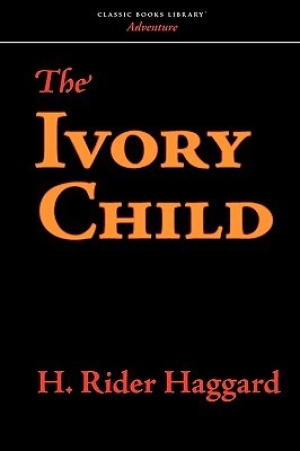 While Quartermain visits Lord Randall, two foreigners come asking for Macumazana -- that is, asking for Allan Quartermain by the name he used among the Africans. The two visitors are Harut and Marut, priests and doctors of the White Kendah People and they have come to ask Allan Quartermain for his help. The White Kendah people are at war with the Black Kendah people who have an evil spirit for a god. And that spirit of the god resides in the largest elephant they have ever seen, an elephant that no man can kill -- save Allan Quartermain. And now our intrepid hero must return to Africa and destroy this evil spirit before it kills every one of the White Kendah People.
Download book (pdf - 1.27 MB)
This link for educational purpose only. Please remove file from your computer after familiarization.

Excerpt from The Ivory Child
Now I, Allan Quatermain, come to the story of what was, perhaps, one of the strangest of all the adventures which have befallen me in the course of a life that so far can scarcely be called tame or humdrum.
Amongst many other things it tells of the war against the Black Kendah people and the death of Jana, their elephant god. Often since then I have wondered if this creature was or was not anything more than a mere gigantic beast of the forest. It seems improbable, even impossible, but the reader of future days may judge of this matter for himself.
Also he can form his own opinion as to the religion of the White Kendah and their pretensions to a certain degree of magical skill. Of this magic I will make only one remark: If it existed at all, it was by no means infallible. To take a single instance. Harut and Marut were convinced by divination that I, and I only, could kill Jana, which was why they invited me to Kendahland. Yet in the end it was Hans who killed him. Jana nearly killed me!
Now to my tale.

Jack Harkaway And His Son's Escape From The Brigands Of Greece

Arm of the Law

Warrior of the Dawn

Introduction to Computing Science and Programming I Sented by Paul