The Land That Time Forgot Sented by Rebecca 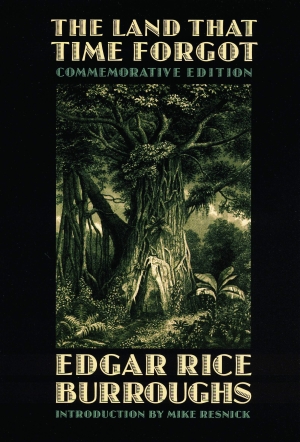 The Land That Time Forgot

Starting out as a harrowing wartime sea adventure, The Land that Time Forgot ultimately develops into a lost world adventure story
Download book (pdf - 582.32 KB)
This link for educational purpose only. Please remove file from your computer after familiarization.

Off the coast of Greenland, a man finds a floating thermos bottle. Wedged tightly inside is a sheaf of papers covered with minute handwriting. As he begins to read, a fantastic tale begins to unwind. The writer, on his way to a WWI battlefield was shipwrecked and his entire regiment except for a woman and his faithful dog are killed. The three are rescued by a passing British tug, but fall prey to the schemes of a German spy aboard. They are then captured by the crew of a German U-boat.

After many near mishaps, they sail towards Greenland. Stranded, with fuel in short supply, they spot an island that seems washed by a warm-water current. As they sail closer, they spot a decomposing human body. Nevertheless, they decide to disembark. An amazing world greets them – filled with lush tropical vegetation, giant reptiles, exotic species and most frightening of all, a race of sub-human Neanderthals....

First published as a three-part serial in The Blue Book magazine in 1918, The Land that Time Forgot by Edgar Rice Burroughs is the first in his Caspak Trilogy. These stories are located in the fictitious island of Caprona, which is called Caspak in the native language of its inhabitants.

The Duke of Chimney Butte

Planet of the Damned

The Pirate of Panama

Doctor Who Short Trips: A Day in the Life

Ben-Hur: A Tale of the Christ

Baseball Joe Around the World

There Is A Reaper
Book Detail
Category Author
Latest Downloads