The Legend of Sleepy Hollow Sented by Sarah Gerdes 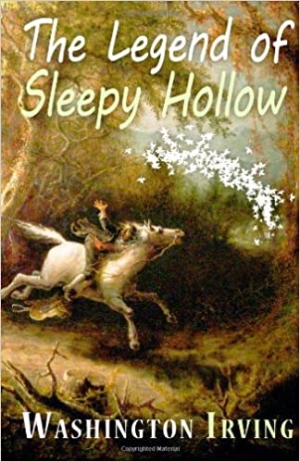 "The Legend of Sleepy Hollow" is a short story by Washington Irving contained in his collection The Sketch Book of Geoffrey Crayon, Gent., written while he was living in Birmingham, England, and first published in 1820.
Download book (pdf - 388.59 KB)
This link for educational purpose only. Please remove file from your computer after familiarization.

"The Legend of Sleepy Hollow" is a short story by Washington Irving contained in his collection The Sketch Book of Geoffrey Crayon, Gent., written while he was living in Birmingham, England, and first published in 1820. With Irving's companion piece "Rip Van Winkle", "The Legend of Sleepy Hollow" is among the earliest examples of American fiction still read today. PLOT The story is set circa 1790 in the Dutch settlement of Tarry Town (based on Tarrytown, New York), in a secluded glen called Sleepy Hollow. It tells the story of Ichabod Crane, a lean, lanky, and extremely superstitious schoolmaster from Connecticut, who competes with Abraham "Brom Bones" Van Brunt, the town rowdy, for the hand of 18-year-old Katrina Van Tassel, the daughter and sole child of a wealthy farmer, Baltus Van Tassel. As Crane leaves a party he attended at the Van Tassel home on an autumn night, he is pursued by the Headless Horseman, who is supposedly the ghost of a Hessian trooper who had his head shot off by a stray cannonball during "some nameless battle" of the American Revolutionary War, and who "rides forth to the scene of battle in nightly quest of his head". Ichabod mysteriously disappears from town, leaving Katrina to marry Brom Bones, who was "to look exceedingly knowing whenever the story of Ichabod was related". Although the nature of the Headless Horseman is left open to interpretation, the story implies that the Horseman was really Brom Bones in disguise. BACKGROUND The Legend of Sleepy Hollow by Washington Irving: hard bound book with a flowered silk cover and gold foil lettering, printed circa 1907. The Legend of Sleepy Hollow was based on a German folktale, set in the Dutch culture of Post-Revolutionary War in New York State. The original folktale was recorded by Karl Musäus. An excerpt of Musäus: The headless horseman was often seen here. An old man who did not believe in ghosts told of meeting the headless horseman coming from his trip into the Hollow. The horseman made him climb up behind. They rode over bushes, hills, and swamps. When they reached the bridge, the horseman suddenly turned into a skeleton. He threw the old man into the brook and sprang away over the treetops with a clap of thunder. The dénouement of the fictional tale is set at the bridge over the Pocantico River in the area of the Old Dutch Church and Burying Ground in Sleepy Hollow. The characters of Ichabod Crane and Katrina Van Tassel may have been based on local residents known to the author. The character of Katrina is thought to have been based upon Eleanor Van Tassel Brush, in which case her name is derived from that of Eleanor's aunt Catriena Ecker Van Tessel. Irving, while he was an aide-de-camp to New York Gov. Daniel D. Tompkins, met an army captain named Ichabod Crane in Sackets Harbor, New York during an inspection tour of fortifications in 1814. He may have borrowed the name from the captain and patterned the character in "The Legend" after Jesse Merwin, who taught at the local schoolhouse in Kinderhook, further north along the Hudson River, where Irving spent several months in 1809. The story was the longest one published as part of The Sketch Book, which Irving issued using the pseudonym "Geoffrey Crayon" in 1820. "The Legend of Sleepy Hollow" follows a tradition of folk tales and poems involving a supernatural wild chase, including Robert Burns's Tam O' Shanter (1790), and Bürger's Der wilde Jäger, translated as The Wild Huntsman (1796). (from the Wikipedia article “The Legend of Sleepy Hollow”, licensed under CC-BY-SA.)

There is a Reaper ..

Pledged to the Dead

Following the Grammar with Haskell Sented by Steve Bark