The Monster Men Sented by Jacob 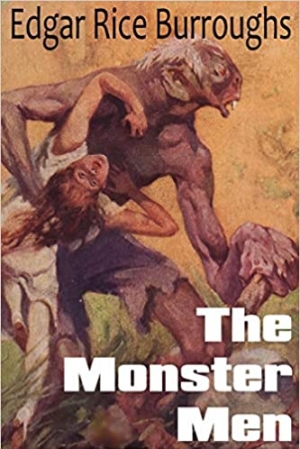 MAN, MONSTER, OR JUNGLE GOD? They called him Number 13, the latest and best of Dr. Von Horn's attempts to make life from lifeless chemicals.
Download book (pdf - 780.70 KB)
This link for educational purpose only. Please remove file from your computer after familiarization.

MAN, MONSTER, OR JUNGLE GOD? They called him Number 13, the latest and best of Dr. Von Horn's attempts to make life from lifeless chemicals. He found himself an almost-human on Von Horn's hideaway jungle island off the coast of Borneo. He saw the monsters that preceded him, growing used to the dreadful travesties of humanity. Not until Number Thirteen met the American girl who was Von Horn's unwilling prisoner did he realize how different he was from the others. Because, monsters or not, he turned against his master and threw in his lot with the girl and his friends with their desperate effort to escape the island of terror. Everyone knew him, but to all he was something different. Even he himself did not know who he was -- or what he was. Professor Maxon knew him as the ultimate product of his experiments to create life - Experiment Number Thirteen. Von Horn knew him as the leader of the Monster Men - eleven ungodly horrors. Muda Saffir knew him as the stranger who defied every obstacle to pursue him with murderous intent. The Natives knew him as the invincible warrior, the fierce foe of the headhunters of Bulan! Virginia Maxon knew him as the only man who could save her from danger the The Monster Men man-being she loved. Edgar Rice Burroughs was an American author, best known for his creation of the jungle hero Tarzan, "Lost worlds" and the heroic Mars adventurer John Carter.

The King of the Golden River or the Black Brothers

The Story of Siegfried

The Rose and the Ring

The Frights of Fiji

The Thrall of Leif the Lucky

The Day Boy and the Night Girl

AngularJS, JavaScript, and jQuery All in One, Sams Teach Yourself Sented by Shon