The Mystery Hunters at the Haunted Lodge Sented by Daniel 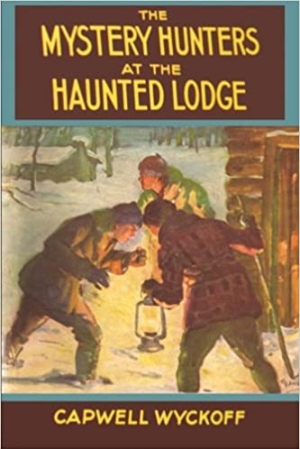 The Mystery Hunters at the Haunted Lodge

This book has been professionally retyped and reformatted to fit modern day standards by officials of the Portuguese Institute of Higher Studies in Geopolitics and Auxiliary Sciences.
Download book (pdf - 665.40 KB)
This link for educational purpose only. Please remove file from your computer after familiarization.

This book has been professionally retyped and reformatted to fit modern day standards by officials of the Portuguese Institute of Higher Studies in Geopolitics and Auxiliary Sciences. Albert Capwell Wyckoff was born on February 21, 1903, in New Jersey. His father, also named Albert Capwell Wyckoff, died when his son was young, an event that forced Capwell to go to work. He never finished high school, yet Capwell Wyckoff became a successful author of two and a half dozen children's novels. He also wrote for children's magazines, including Boys' Life and The Open Road for Boys. Wyckoff is most well known for his series of mystery and adventure novels on the Mercer Boys, published in sixteen titles between 1921 and 1951. Interspersed among them were several other mystery novels, a perennially popular genre among children. Capwell Wyckoff wrote two stories for Weird Tales, "The Grappling Ghost" (July 1928) and "The Guillotine Club" (July 1929). Late in life, he wrote a number of Christian novels for children under the name Albert C. Wyckoff. He was well qualified, for Wyckoff served in the lay ministry in Arkansas before becoming ordained in the Presbyterian Church. He used the royalties from his books to pay for missionary work. For many years, Capwell Wyckoff lived and served in Kentucky, the place of his death on January 10, 1953. His headstone reads: "Well done, thou good and faithful servant."

The Monster and Other Stories

The Horror in the Museum