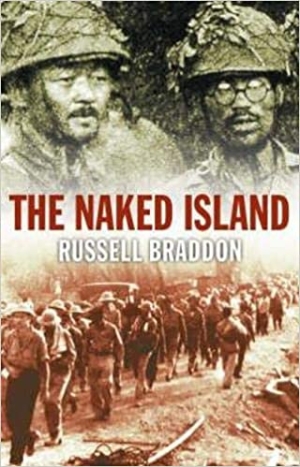 The experiences of an Australian solidier imprisoned in Changi for four years during World War II.
Download book (pdf - 1.34 MB)
This link for educational purpose only. Please remove file from your computer after familiarization.

Russell Braddon wrote The Naked Island in 1950. By 1968 it had been reprinted eleven times and sold one million copies in Britain alone. As the author states, ‘It was written to tell the world what sort of people the Japanese can be. It was written to explain what they did in the war and what they might well do again.’

There are numerous books on the war in the East but this is one of the greatest. Often hilarious, even amidst the horror, this is the story of what the Japanese did to those they captured. It is written in prose all the more effective for its dry understatement and sharp observation by a man who never lost his will to live even in the most terrible circumstances. Braddon’s story is however not that simply of a prisoner of war. In his comments on the equally brutal Japanese treatment of native workers and indeed any who were not Japanese, he reveals the hollow reality of the ‘Greater Asian co-prosperity sphere’ promised by the Japanese, and attempts to understand how one group of human beings could behave in such a way towards another and the inhuman ideology and fanaticism which drove the Japanese on.

Even today the subject of Japanese war guilt is never far from the headlines and it was only last year that a deal on compensation was arrived at for surviving POWs.

Dwellers in the Hills

The Web of the Golden Spider

The Space Between the Stars

The Taming of Red Butte Western

Practical Tinker Board Sented by Shon