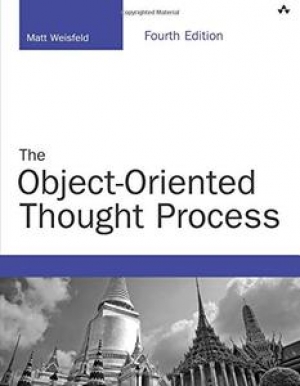 Object-oriented programming (OOP) is the foundation of modern programming languages, including C++, Java, C#, Visual Basic .NET, Ruby, and Objective-C. Objects also form the basis for many web technologies such as JavaScript, Python, and PHP.

It is of vital importance to learn the fundamental concepts of object orientation before starting to use object-oriented development environments. OOP promotes good design practices, code portability, and reuse–but it requires a shift in thinking to be fully understood. Programmers new to OOP should resist the temptation to jump directly into a particular programming language (such as Objective-C, VB .NET, C++, C# .NET, or Java) or a modeling language (such as UML), and instead first take the time to learn what author Matt Weisfeld calls “the object-oriented thought process.”

Written by a developer for developers who want to make the leap to object-oriented technologies, The Object-Oriented Thought Process provides a solutions-oriented approach to object-oriented programming. Readers will learn to understand the proper uses of inheritance and composition, the difference between aggregation and association, and the important distinction between interfaces and implementations.

While programming technologies have been changing and evolving over the years, object-oriented concepts remain a constant–no matter what the platform. This revised edition focuses on interoperability across programming technologies, whether you are using objects in traditional application design, in XML-based data transactions, in web page development, in mobile apps, or in any modern programming environment.

“Programmers who aim to create high quality software–as all programmers should–must learn the varied subtleties of the familiar yet not so familiar beasts called objects and classes. Doing so entails careful study of books such as Matt Weisfeld’s The Object-Oriented Thought Process.”

Contents at a Glance

ABAP to the Future

The OWL and the Architect

Scrum and Xp from the Trenches, 2nd Edition

Text Genres and Registers: The Computation of Linguistic Features